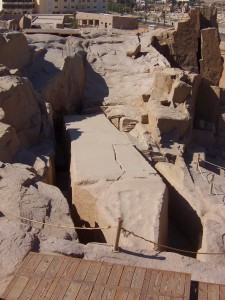 950 kms from Cairo, following the course of the Nile for the south is the legendary city of Aswan. Aswan comes from the ancient Egyptian word “Soun” meaning souk or trade and is located on the southern border of Egypt, a strategic location on the trade route. In the past it was the last “civilized” point before the caravans in search of woods, incense, myrrh, exotic animals, and slaves entered in black Africa.

Aswan was also a wealthy city because a few miles south of it, there are many pink granite quarries for the construction of obelisks and also removal of stone blocks for building pyramids, statues and colossus that were from immemorial time a great source of wealth for this region.

In the nineteenth century intellectuals and writers looking for inspiration like Loti, Saint Exupery or Christie were left conquered by her beauty, sharing the ancient city with young entrepreneurs and adventurers seeking the dream of African wealth.

Today it is a city of more than two hundred thousand inhabitants which represents the final point for most cruises on the Nile, as the “First Cataract” marks the natural limit of navigation on the river. In its surroundings there are multitude of activities and interesting things to see if you have the time. If what one likes is wander, the souk (suq) of Aswan is the first natural destination, certainly will not disappoint, not only c 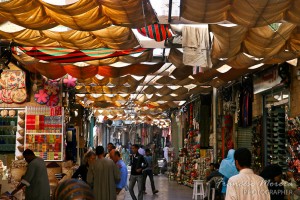 an we get a thousand and one teas and spices (some quite unknown as karkadé, which actually is the dried hibiscus flower, highly valued for its heart-healthy properties) but also find hundreds of ointments and African crafts and will enjoy the bustle of the market. Elsewhere in the souk you can see the ovens where the bread is baked, ironers, (with those iron plates that are heated with coals like our grandmothers used), butchers …  A fun and highly entertaining ride.

In a lush and rocky island, we can visit the beautiful Temple of Philae, dedicated to Isis.

Very early in the rich egyptian religion, the cult of Isis, the mother goddess, made Philae was recognized as the largest sanctuary of the principal female deity of the Egyptian pantheon. His cult, although secretly and minority today has 5,000 years of life.

But if you prefer to explore the surrounding areas then the best is to hire a falucca, these traditional sailing boats of a single mast which move quietly by the winds and sail without haste this part of the river. You will pass by the Elephantine Island, which gets its name from the whimsical shapes of the surrounding rocks, reminiscent of the pachyderm. Opposite, on a granite hill at the edge of the mighty Nile, will see the famous Old Cataract Hotel, which takes its name from the First Cataract, a place soaked in history recently restored, where again find the trails of the intrepid Agatha Christie since here was staying and wrote the book “Death on the Nile“. 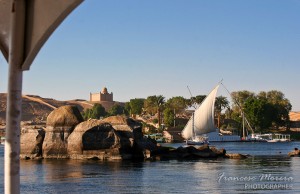 avigate to the touristic Nubian village is not a bad idea, the journey is delicious, the light is perfect, and you can enjoy a gentle breeze wich is very relaxing, and see the landscape and vegetation of the river, even some may make his dream of swimming in the Nile. High on a far away hill you can see the mausoleum of the Aga Khan, and after a one hour journey finally reach the Nubian village. I have to say that I was something reluctant to do this tour because “the Nubian village” 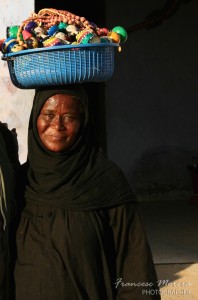 is a tourist product, but just for the river sailing it was worth, and though these people live of the tourist, is very curious walking the streets, where desert sand goes into homes and courtyards of the simple constructions of adobe and reed. But who are the Nubians? Because they are black African features, and Nubia, (Sudan today) is not obviously Egypt. The Nubians lost their villages when it was built the famous Aswan dam, and in return the Egyptian government took them to this area where they make their living from handicrafts, camel rides, and tourists. Two dams were built in Aswan, the new dam and old dam.

Our guide kept saying that the Nile is the blood of Egypt, metaphorically speaking, as it is this strip of fertile land that runs its course that allows the feeding of most of its population. Following with metaphors, the New Aswan Dam, built to 8 kms from the old (it was built by the British in 1902) would be the heart that pumps this blood. The old dam was enlarged until it was insufficient. With this monumental work of hydraulic engineering (not without detractors) t 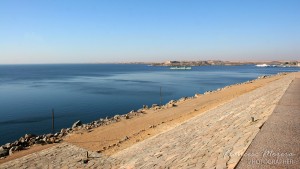 hat took place in the sixties, they were able to control the river floods, which every summer was overflowed by water from Uganda and Sudan. It is true that precisely these river floods were those that turned the river banks into fertile riverside land by depositing a limo full of very beneficial nutrients to the ground. But the inability to predict floods meant the loss of harvests on both ends, flooding, and drought. With the dam controls the level of floods, and thus protects lands and crops, and produces 15% of the country’s electricity. Its construction supposed a high ecological impact that was no 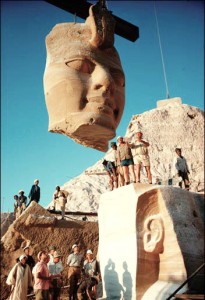 t taken into account and it would have meant the loss of the monuments of Nubia. Thanks to the international community and UNESCO (that joined forces) could ensure the recovery and protection of them. Even Spain took part, and Egypt gave thanks giving away the Debod Temple, currently in Madrid. The result was the move, stone by stone, of twenty-four monuments that otherwise would have disappeared under water, including the Temple of Philae, moved from the original island to Agilkia Island where we visit today, or the temples of Abu Simbel, who were displaced backwards 250 meters, and 65 meters above the lake, cutting large stone blocks, to 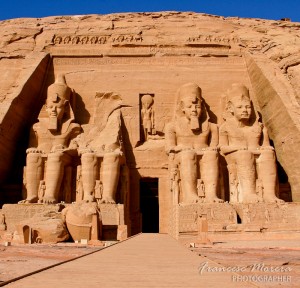 then reassemble them piece by piece as if it were a puzzle. This task lasted four years. And the result is spectacular; nobody nowadays would say that these temples were not always here, because the cuts are not noticed by more than one search traces. Not even in the false dome in which are embedded the temples, which originally formed part of the rock. It’s amazing what human beings can do when he proposes, here is an example of ingenuity, cooperation and international solidarity. The perfect end to our tour of the Nile. 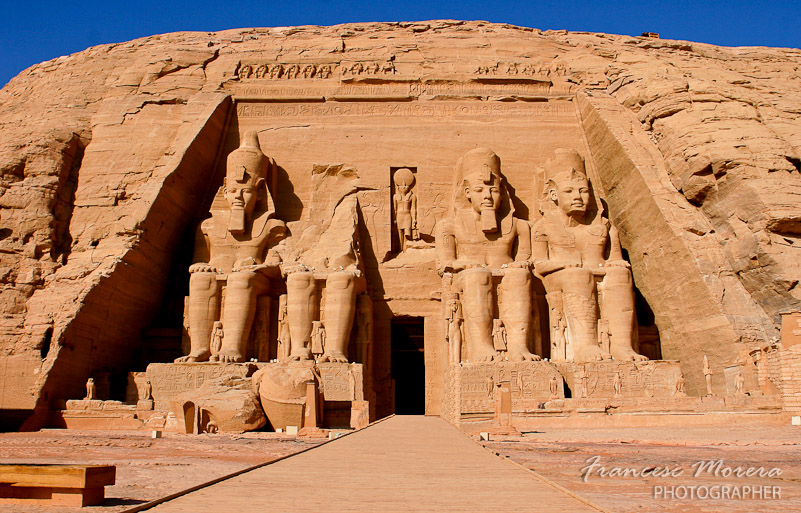