In today’s Myanmar, formerly Burma, 89% of the population has got deep Theravada Buddhist beliefs as in Cambodia, Sri Lanka and Thailand, among other countries. But decades of isolation that has hit the country, have made their practice differs from that of neighboring countries. Of all Buddhist countries, Myanmar is the only one having monasteries with mor 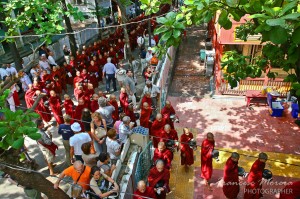 e than 1,000 monks. In particular, a monastery in Mandalay (Maha Ganayon) has more than 2,600 monks. This along with the countless temples, pagodas, and shrines that exist in the country, make Myanmar  a country of pilgrimage and many people in Thailand, Taiwan, Korea, Singapore and Japan visit it.

In a population of around 55 million inhabitants, the monastic community or shanga reaches about 500,000 monks and nuns, evidence confirming that the Buddhist faith is more alive than ever in Burma, where they outnumber the military. In almost every family, there is a relative who is a monk or nun. Families acquire great merits and respect when one of his sons “takes the robe and bowl.” Each child first enters 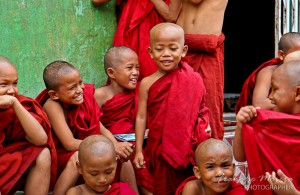 as a novice at the monastery of the village around 6-8 years of age, in a ceremony known as Shinpyu, which is equivalent to the first communion in Christianity.

It’s a short stay in the monastery of one month, and throughout their lives is more than likely to return to it for longer stays, they become ordered novices, or who after spent time as ordained monks return to civilian life, because this is not a decision for life, and the time spent studying the monastery are accumulated merits for the individual.

Mandalay is the cultural and religious center of Buddhism in Burma, with its eternal hills of Sagaing plagued of monasteries wrapped in mist, the place chosen by Siddhartha Gautama for his retirement.

This large community highly respected throughout the country, equal in number to the military. In 2007, in what the media called “saffron revolution” west was perplexed when they flagged out peaceful protests taking the streets to protest against rising fuel prices which rose by 500 percent overnight and without warning. Were the anti-government demonstrations more numerous of the past 19 years. There were dead and wounded, but it was undeniable that they threw a pulse to the government and they won. The monks defy the junta in matters in which they have moral authority. And now they have become the leaders of the o 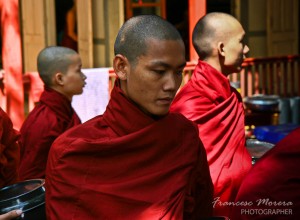 Monks cannot vote, but they are the country´s more educated population and enjoy a more comfortable life through daily donations of ordinary people who maintain them. The monastic life does not keep them apart from society; on the contrary, they are well aware of the oppression and shortages that the country suffers. Therefore, if there is a collective that for their knowledges and convictions could stand up to the government despite his pacifism, it is them. Since 2007 incidents they are considered a sort of third political force in the country that is aware of all the events and have a lot of drawing power and conviction, as they are also the most organized institution after the Burmese army.

But this is not something new in the history, in ancient times the Buddhist clergy played a central role as adviser and guide of the national policy in the royal courts. When Burma became a British colony, the monks were at the forefront of the movement against Western imperialism. His political activism continued even af 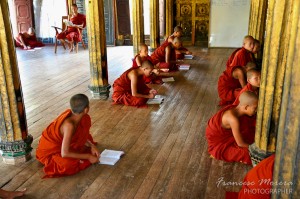 ter independence, when the country was ruled by successive dictatorships after the coup in 1962. Many were massacred in the 1988 student demonstrations.

Furthermore the monasteries or Kyaung play an important role, especially in rural areas, where there are barely schools. Thanks to donations from lay people, are in charge of basic education for the poorest children, to those who care for and feed while parents work.

Some might see the shadow of proselytism after these actions, but the fact is that after visiting many of them and being warmly received, I see that this is a chain of favors that joints the society and attempts to f 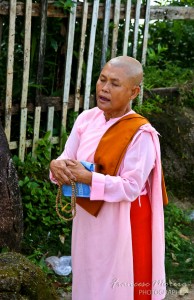 Regard to women, they can follow the path of religion, but they are not expected to do so. In an ordination ceremony similar to that of men, take the vote and within the ritual, shave their heads, ears are pierced and pink togas are taken. This female community does not receive so much aid and donations like monks. They, along with their dedication to prayer and study, must cultivate the land and provide for sustainable community.