I’ve mentioned in previous posts, talking about Burma and Buddhism is almost inevitable as Buddhism is an integral part of Burmese culture.

The Burmese have been and still are a very religious people and it is almost impossible to separate Buddhism from other aspects of their life. Since centuries ago, specifically in 1057 its main promoter, King Anawratha adopted Buddhism and became the official religion of the state, started a building fever for the greater glory of Buddhism that has reached our days. Have spent several centuries but it can be said that faith remains intact. That is why the country is full of religious buildings, temples, stupas and pagodas, and thousands of Buddha images. We will see them in fully sacralized environments or inside a cave, no mater if we are in town or in the middle of a hill, it is certain that we can always see the dome of some monastery or temple.

The protagonist of this entry will be the many giant statues of Buddha that dot the countryside of this incredible country.

But who was Buddha? There are historical and scientific certainty about the existence of Gautama Buddha, originally named Siddhartha Gautama and later also known as Sakyamuni or Tathagata. It is known that he came from the ksatriya caste, composed of warriors and nobles. The stories about the life of Siddhartha, as other prophets are mixed with myths, legends and symbolism and are the main decorative motif of hundreds of temples and monasteries throughout the country. And as we walk one never ceases to recognize that this is indeed the land of Buddha. The simplicity with which the majority of the Burmese population live does not prevent the maintenance of the important monastic community of the country and the development  and undertaking of huge projects that are entirely borne by the common people, who contribute with their work or with donations and accumulate merits to offset the bad deeds. 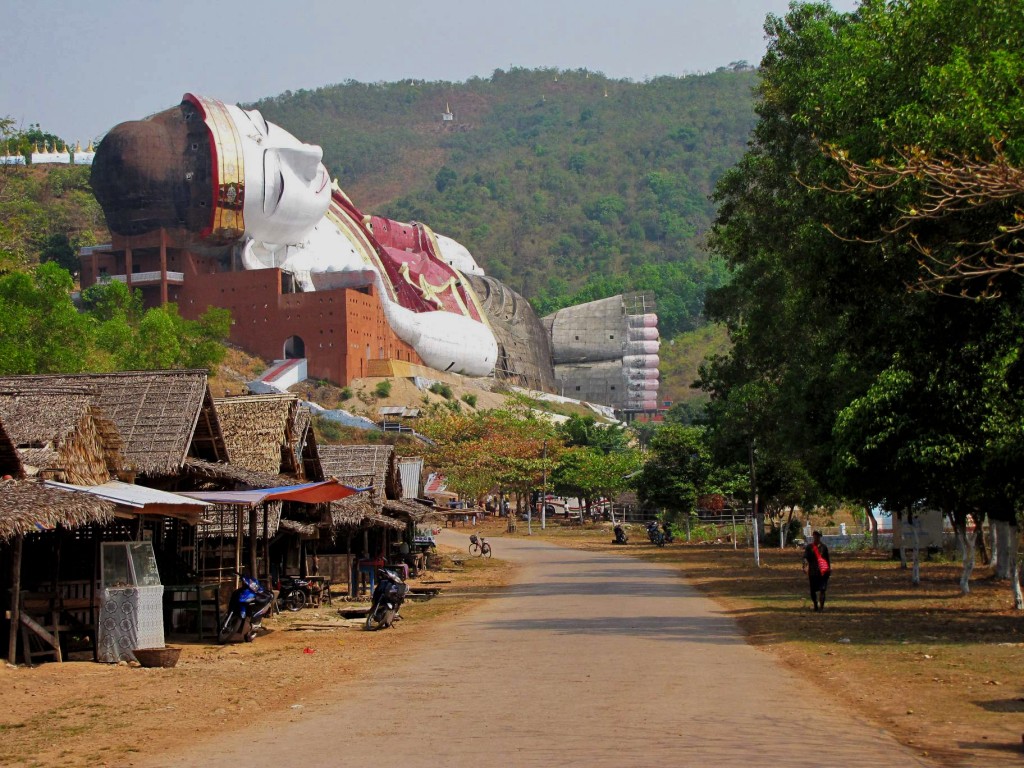 When I visited the country there were at various stages of construction two mastodontic projects. Specifically giant statues of Buddha, one reclined in Mon State, one standing in Monywa, in the state of Sagaing, almost completed. Regardless of the artistic value that may be more or less discussed, I assure you will open the mouth of admiration or surprise when some of these statues cross in your path. It can be on the top of a hill, in the middle of sown fields, at the edge of a lake or covered by ugly metal structures to preserve them. I will mention some of them.

In Mon State there are several, and here is the world’s largest one to date. We refer to the Zinathukha pagoda reclining Buddha surrounded by jungle and stupas in the Taw Sein Win forest, in Mudon, located 29 km south of Mawlamyine, the third largest city of the country. Can be clearly seen kilometers before reaching, in the exit from Mudon to Mawlamyine on the right side of the road and almost directly opposite the Taung Kyauktalon Buddhist shrine.

This reclining Buddha is a concrete structure 180 meters long and 40 meters high, and construction which began in 1992 and that of course is accomplished with the donations of the faithful Buddhists, is now almost finished. The Buddha image is known as Yan Aung Chantha Zinathuka. The Buddha seems to stretch in the middle of the jungle surrounded by lush jungle vegetation on the slope of a hill. The strange thing is that aside from its outer shape it is a building housing 182 rooms within its 8 floors with dioramas of Buddhist teachings.

On the way to Bago we found two reclined giant Buddha statues, one of them is in Shwe Thalyaung Pagoda. It was built in 994 by King Mon Migadepa II and was lost when Bago was destroyed in 1757. In 1881 it was rediscovered under the vegetation of the jungle when looking for sand for construction of the

railway. Not the prettiest but it is one of the most revered in the country. Buddha is represented in a resting position instead of as traditionally, in the time of death. Its length is 55 meters long and 16 meters high and feet are decorated with scenes from some reincarnations of the Buddha’s life.

In the same way to Bago and very close to the Shwe Thalyaung one we will find the beautiful Mya Thalyaung statue. It is easy for us to bring to mind the story of one of Gulliver’s Travels, when he is shipwrecked and awakens on a beach to find out that 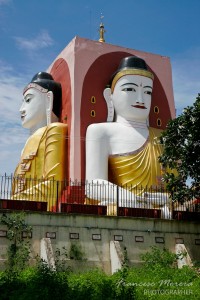 he is giant … because everything is small around. It’s just a statue that is less than 70 years old, but is really nice and despite the size of the Buddha it is represented quite “human”. If we move few kilometers away we will found out that the statue is located lying along the shore of a lake, which confers to it even more beauty. It is similar to the Shwe Thalyaung one in dimensions.

The Kyaikpun Pagoda is the sanctuary of four seated Buddhas, 27 meters high. The statues, which are sitting in four different positions and back to back, represent the four Buddhas Kakkusana, Konagamana, Kassapa, and Gotama facing the four cardinal points. The four seated Buddhas, were built by King Migadippa Bago in the seventh century and renovated according to the tradition by King Dhammaceti in the fifteenth century.

In Yangon, and surrounded by establishments where they read the horoscope and good fortune is the Chaukhtatgyi Paya, that houses the reclining Buddha of the same name. This huge Buddha 70 meters long as well as the Buddha of Shwe Thalyaung pagoda lies within a hideous metal structure to protect it from

the elements. The original statue was constructed in 1907 on behalf of a merchant. This statue was badly damaged so in 1957 it was demolished and in its place was built a new one. The construction was funded entirely by private donations. The original size of the image was 59.30 meters long and 30.4 meters high. But in a reconstruction made in 1973 the size was enlarged to the current 65.85 meters long. The lacquered finish is glossy and bright, full of details; even say it is the richest in ornaments we’ve met.

Another area in which we find record giant statues of Buddha is Monywa, Sagaing district. The standing statue known as Laykyun Setkyar has 132 m high

(including the base) and thirty-one plants (in reference to the 31 planes of existence). It has an elevator that allows access to the 16th floor and look out over the valley. Recently built, it is as I mentioned the second largest  standing Buddha statue in the world after the Spring Temple Buddha in Henan, China. At his feet lie another impressive reclining Buddha statue, known as Alantayar, built in 2006 and the largest in the world until the construction reclined statue of Zinathukha pagoda. It has a length of 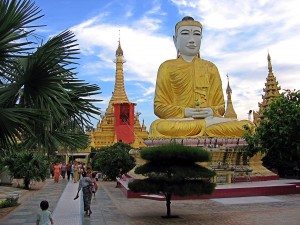 101 m and width of 18 m. You can access inside and walk from the Buddha’s head to toes, guided by 9,000 metal images of the Buddha, narrating the events of his life. It is planned to build a third seated one next to these two. Regardless of its religious sense, it is easy to guess that since opening the statues have become one of the major tourist attractions of Myanmar.

Another major Monywa Buddha statue is the Shwezigon Paya, a seated one.

In this link you can see a video with images of Bagan.