According to the eco-religion founded in the fifteenth century by a farmer in the region of the Thar desert in Rajasthan, known as Guru Jambheshwar, “to lose one’s head is better than losing a tree” 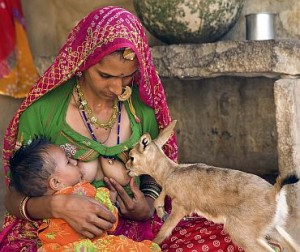 The guru Jambheswar was born over 560 years ago in the same year in which the seaman and explorer Christopher Columbus was born. Unlike Columbus, who after numerous circumstances stumbling over an unknown land that would prove to be a new continent, Jambhoji came across a simple truth that not even the greatest philosophers of that time recognized. In fact, humanity needed five hundred years to understand what Jambhoji learned and preached. And yet everything he said was simple: to damage the environment is harming oneself.

For centuries, Bishnois have been enthusiastic supporters and preservers of plants and animals.The Bishnoi tribe concentrated in the western Indian state of Rajasthan, have done over the centuries, a unique blend of ecological sense and religious sensibility the cornerstone of their faith. The Bishnoi is a caste in the Hindu caste system, are strict vegetarians and do not kill living creatures because nature is holy to them. The basic philosophy of this religion is that all living beings have the right to survive and share all resources.In fact the word “Bishnoi” means literally twenty nine, which are the principles

relating to personal hygiene, basic health, social behavior, the worship of God, biodiversity and good practices in agriculture that after a long drought made ​​the Guru Jambheshwar.The twenty nine principles were not only meant to conserve biodiversity but compliance ensures a healthy, ecological and social life of the community. The Bishnois worship a Hindu god, Lord Vishnu, but at the same time, the dead are buried as Muslims with the idea of returning nutrients

substances to the soil returning the body to the elements. Alternative interpretations say however that this practice was to prevent cut down trees to burn the dead. Both are in line with the precepts of Jambhoji. And one of them prohibits the felling of green trees, and this led to their ultimate consequences two centuries ago when at least 364 Bishnois died trying to protect the trees in Khrejarli, “about 200 years ago, the maharajah of Jodhpur ordered cutting down the forest to build a new palace. When maharajah´s men came to cut them down the Bishnoi from surrounding villages protested. – We will die, but will not allow trees to be felled” andso it was. It is not a legend. Still remember this as the great sacrifice of Khejarli. A tree on earth Bishnoi is not cut before it dies. Only after this its timber may be used for other purposes. However, two centuries after modernization it is more difficult to combat. No matter who want to stay loyal to their ideals, against this they are clearly losers.

In fact, this way of life is under threat because hundreds of small textile businesses in the city of Jodhpur have polluted the Loni River, which is essential for maintaining the sacred forest of Kherjali green and allow wild animals that are major on the beliefs of Bishnois, graze. Nothing grows there, the land is dry and dead.

Furthermore the villagers are in conflict with poachers. They live in very close proximity with animals such as deer, antelope or the peacocks that roam through their villages. If the hunters kill the mother of a fawn Bishnoi women care for it breastfeeding even like a son more. Poaching is increasingly widespread. A small community that extends over the states of northwestern India, including Gujarat, Haryana, Madhya Pradesh, Uttar Pradesh and Rajasthan, has contributed more to the protection of nature and wildlife than the whole country together. They have learned, over time and difficulties, such as nurturing nature and grow with it rather than exploit it, living in harmony and protecting plants, trees and animals getting everything for their livelihood but taking only what they need. However, ironies of life, the Bishnois have a very uncertain future.

More and more the region suffers from extremely long droughts that devastate crops and cause widespread deaths of livestock and wildlife. With wells drying up and people starving, communities have been forced to rely on the help of social welfare organizations and government to survive.Nowadays, larger populations and more defined boundaries of private property are pressuring the desert dwellers of Rajasthan.