Nepal is an interesting blend of religions, territories and peoples, which comprises 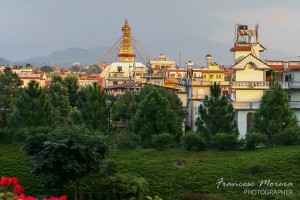 more than 30 different ethnic groups. Half Indian, half Tibetan, Hindu and Buddhist, both major religions coexist harmoniously and it is difficult to determine where one begins and the other ends because both share deities and rituals. And not to forget that Buddha (Siddartha Gautama) was born here in the Kathmandu Valley, specifically in Lumbini in 550 B However, despite the coexistence or symbiosis that exists between the two faiths, Nepal is the only country in the world which recognizes as the official religion the Hinduism. 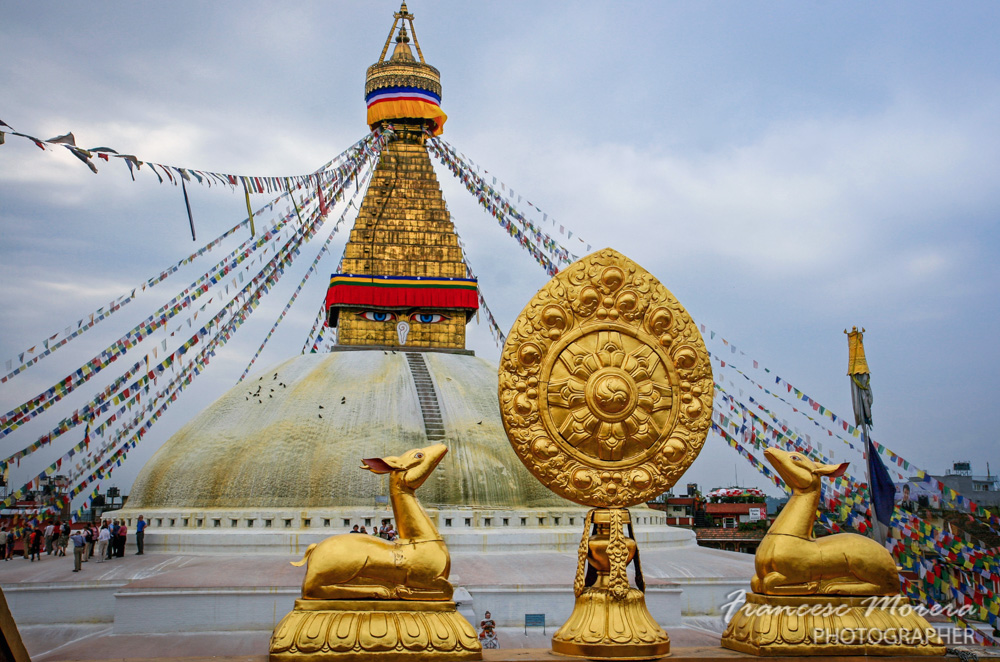 So I think talking about Buddhist temples in a Hindu nation should be simply an anecdote, but the fact is that it is not. Two of the most famous and essential temples-monuments in the country are Buddhist. I am referring to the Swayambhunath and Bodhnath stupas, both in the area of Kathmandu. This latter is also an icon of the country, a hallmark everyone associates with Nepal, and no wonder. Of course, in no way do I want to miss the other attractions of the valley, riddled with beautiful medieval towns of Newar culture frozen in time and that are a “must” visit, but I already talked in greater detail in a previous post. Today I want to write about Bodhnath.

The Boudhanath Stupa is one of the seven World Heritage sites around the Kathmandu Valley. Located about 11 km from Kathmandu Durbar Square, on the outskirts, in what was once the village of Bodhnath. The great stupa mandala is the largest in Nepal and one of the largest in the world.

Bodhnath by Yann Arthus Bertrand from the sky.

According to tradition a prince erected as penance for causing the death of his father. Although its exact age is unknown, historians agree that is about 1500 years old The gigantic stupa of over 36 m tall stands out from the surrounding buildings and is clearly visible from the distance. In the past it was on the ancient trade route from Tibet which enters the Kathmandu Valley by the village of Sankhu, in the northeast corner of the country and from here goes directly to the south, across the Bagmati river in a secondary way of the Silk Road that penetrates India. Pilgrims and Tibetan merchants have rested and prayed in this place over the centuries in what for them is the largest and most auspicious Tibetan Buddhist temple outside Tibet. 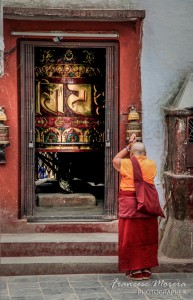 Since the Dalai Lama fled Tibet in 1959, Nepal has played a key role in the Tibetan exile community, providing a safe refuge and a passage to India, residence of his holiness. Nepal, through the Himalayas, has been the traditional way of escape for many Tibetan in exile who ran away from the country in the 1950s. And it’s not an easy route, usually traveling on foot, without the means or the necessary equipment to deal with the elements, taking shelter on the trees and on ledges and dodging Chinese patrols on trips that can last for months. Many then decided to settle near Bodhnath, being populated the neighborhood with the newcomers and their descendants. Despite the support and shelter that Nepal always provided them with, the situation today is far from being ideal for the pressures exerted on China over its Nepalese neighbor over which it is increasing influence. But still I think that arguably Bodhnath Stupa is one of the few places in the world where Tibetan culture is alive and accessible, where beats the heart of Tibet. In fact, nowadays Bodhnath, known as “Little Tibet” is home to around 16,000 Tibetan refugees and about fifty monasteries and gompas, so it is also very significant the presence of monks and novices around. The stupa, universal throughout Asia, began as a reliquary monument to store treasures and relics of Buddha but later it became an expression of the ideal of 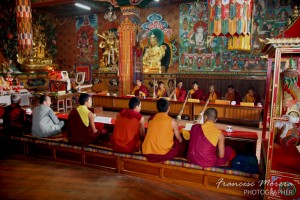 enlightenment. Symbolically reveals the path to enlightenment. The base of the stupa of Bodhnath consists of three large cross-shaped platforms, above these there are two other this time round platforms on which rests the great white dome of the stupa. Crowning it there is a pyramidal central tower, with thirteen gold steps that symbolically lead to Nirvana, on the basis of which we find perhaps the most beautiful detail of the stupa: the harmika. In each of the four sides, there are two painted eyes, and between the eyes there is a question mark (the symbol of Nepal for the number 1, which symbolizes unity and how to achieve enlightenment). A small third eye represents the Buddha’s wisdom. You can climb to one of the many coffee shops around the stupa to contemplate it in the full extent or to the platforms and surround it from all the angles, you will see that the “all-seeing eye”  will continue looking unperturbed while air prayer  flags wave. 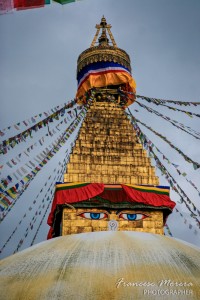 I visited Bodnath twice, I was fortunate to stay at the Grand Hyatt hotel, so I just had to cross the garden gate and walk about five minutes to get there. The dusty streets surrounding the huge stupa snake through humble artisan workshops and food stalls The different trades are offered on the street sides, shoemakers, barbers, dressmakers, there is a lot of activity. Strangely though the stupa is visible from afar when you’re around you do not see it, hidden in the narrow streets. But you perceive it; you know that no matter where you walk to you will end up finding it, as the stupa is the undisputed center to which all roads lead. And so it is. If you want to visit inside some monastery it is best to go in the morning, but if not, I think the best time to do it is in the evening. At dusk the mystique of the place is accentuated as around the great stupa there is no electricity (or at least there was not when I visited) and candles will take the relief to the newly hidden sun. That is when the time for prayer comes. I remember the deep sound of a trumpet, the air impregnated with the smell of incense and colorful human tide of hundreds of people wearing saffron robes or traditional Tibetan costumes surrounding the stupa following the ritual of Kora. Many walked spinning the prayer wheels, others passing the beads of his rosary. Turning to the stupa at the proper sense, clockwise of course, makes the Buddhist believers earn merits. 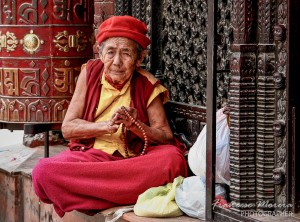 Students of Buddhism, pilgrims, neighborhood residents, young and old, all come together to the ritual while recite the universal mantra: Om mani padme hum (ॐ मणि पद्मे हूँ It’s hard to be merely a spectator there, the atmosphere captivates, you feel hypnotized by the tide of people flowing in silence, and unwittingly becomes a participant in the things that are happening around you. For many stupas ever have seen, and I know a few, Bodhnath is different from the others. You can breathe in the air a great atmosphere, vibrant and full of energy. Fortunate those of you that can visit it on a full moon, you will see that is decorated with new prayer flags and candles around. The Theravada Buddhism celebrates this event because it is believed that the historical Buddha, Siddhartha Gautama, was born and died during full moon. Definitely an experience if you ever visit Kathmandu.