So the Persians baptized long before Alexander the Great conquered it in the fourth century BC, although the first inhabitants arrived seven thousand years ago.

If in a previous article we talked about the beauty and uniqueness of the landscape of Pamukkale, in another part of the country, the landscape of this region of Turkey, Central Anatolia is not for less. Here again, nature is the protagonist. Cappadocia is a land full of legends, written in their particularly capricious rocks, troglodyte caves and underground cities.

But the origin of this special and dreamlike landscape is to be sought in the volcanoes in the area. 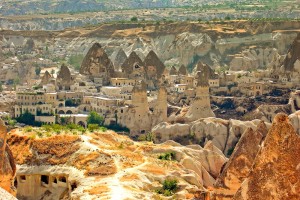 These constructions and the strange shapes of this lunar landscape are the result of countless eruptions of two volcanoes that delimit the area, one of 3.200mts altitude and other 4.000mts, with a 150 kms distance from each other.

Ten million years ago, the lava of volcanoes, among which are the Erciyes and Hasan, were covering the whole area.

As temperatures fluctuate very dramatically in this area, in the winter, you can stay three months under the snow to the crushing summer heat, the strong winds and underground rivers were piercing and eroding the ground, so that the different layers, according to their hardness were modeling itself. The base is very resistant made from basalt, but in other upper layers, the material, porous and malleable allowed to the different civilizations sculpting and creating underground dwellings, churches, and burials. With such climatic oscillations, to live within the earth is not a bad 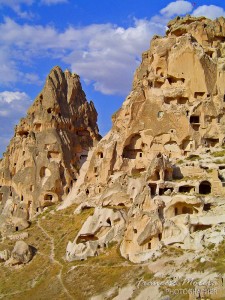 option. In fact, one can experience what living in the rock is like, as there are numerous troglodytes hotels in which to have the “full experience”. Nevsenir is considered the gateway to Cappadocia.

The first place we will surely visit is the open-air museum of Göreme, a group of cave monasteries and churches dating back to the early days of Christianity. These microliths were primarily a refuge for monks and ascetics of Syria and Egypt fleeing from Roman persecution, and, after Arabic and Persian incursions. The interior of them, is not ju

st “dump” of the rock, but is moreover beautifully decorated with domes and Byzantine frescoes, highlighting the “Dark Church” and “Church of Apple”, St. Basil and Santa Barbara among many others. Near Göreme and crossing the valley of the pigeons, or Güveranlink (where peaked elongated shapes that served as shelter for birds of which they took advantage collecting the guano for crops), you will meet Uchisar, which is easily recognizable by a cave construction which protrudes from the others: his castle. A large volcanic rock filled with windows, spaces and tunnels of about 150 meters high. The views to the volcano Erciyes of almost 4000 meters are comparable to viewing from a hot air balloon, but, yes, it lacks of the emotion of overflying.  It reminds me of one of those castles that one does on the beach, leaving wet sand slip through your fin

gers. What they had to work to build these places…

Near Uchisar, will enter the valley of Pastabag, definitely we’ll love the scenery, it is here that we can see the “fairy chimneys”. The reason why they are called so rests on a legend in the area. They say that thousands of years ago lived in peace and harmony men and fairies. Until a man and fell in love with a fairy, disobeying the rules of both peoples. The penalty was very severe: death. But the queen of the fairies reconsidered it and forgave lovers, but to prevent this from happening again, fairies turned into doves, so the men who live there care of pigeons living in the fairy chimneys, these volcanic tuff curious structures that arise between fields sown with vines. 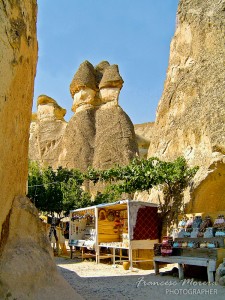 In fact, they are called “fairy chimneys”, because the ancient inhabitants of the area believed that only supernatural creatures could inhabit such a unique place and produce those strange sounds, which were nothing more than the wind noise when passing between the hollows of the rock. It is an unforgettable landscape. So beautiful in the winter covered by the snow as in the summer sunset where the sun creates effects and reliefs on the rocks.

The next place we want to see is the underground city of Özkonak. We went into one of these cities carved into the rock, it’s incredible what these people did here, and the time and effort they would dedicate digging several plants with underground passageways that were closed with stone wheels, blocking in case of invasion.Everything suggests that in reality they did not live here but used the site to defend against attacks and invasions and may remain hidden up to three months. 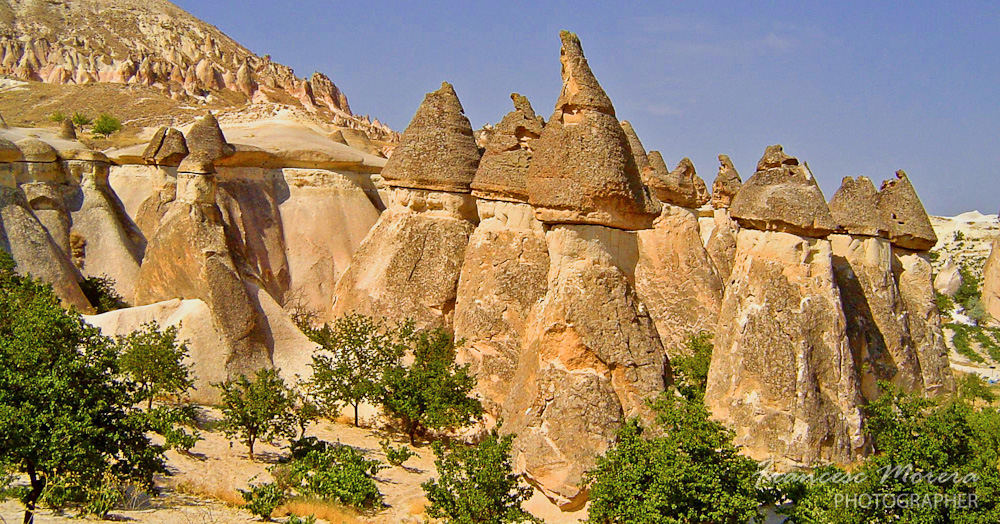 Through narrow tunnels and passageways we see vents that were hidden from abroad, store for supplies… Anyway, it’s funny, but at the same time it is a bit claustrophobic, one feels like a worm because the air is heavy and smells much to humidity.

But if Özkonak surprises us, Derinkuyu, is much bigger. It seems that it was a shepherd from Derinkuyu w 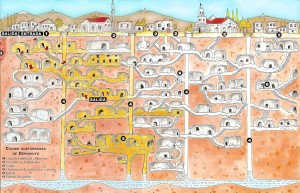 hich, in 1963, after demolishing a wall of his house-cave, he found a room that did not know, and that led to another, and another. Unknowingly he had discovered the underground city of Derinkuyu. Excavated in seven floors that reach forty meters deep, it is known that the Hittites before Christians had already dug and lived here, and we are talking about 1400 BC. In their different levels there was everything, stables, church, kitchen, cellar … everything. It is tho

ught that there was room for 10,000 people. Scattered and covered by vegetation there was up to 52 vents that could allow them enough time to be underground. There was even an underground water channel that gave humidity and guaranteed that the water could not be poisoned!.

One remains, definitely marveled of human ingenuity, but I’m glad to go outside, I cannot imagine what would go weeks without seeing the sun.