Located 64 km from Tetouan, 100 km from Ceuta and 120 km from Tangier the beautiful city of Chefchaouen in the region of Gomara western Rif sits at the foot of the mountains Jebel Tisouka and Jebel  Megou, about 2000 m high. The toponym of the city means “looking at the horns” in reference to these two towering peaks that dominate it. 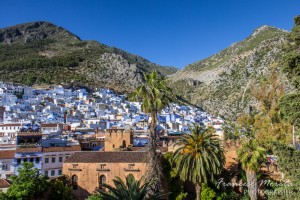 Chefchaouen, Chefchaouen or Xaouen, is one of the most photogenic and most pleasant cities to visit for the outsider who moves in the northern Morocco. In fact when entering the old Medina, especially if you are coming from areas of southern Spain as the Axarquia, Las Alpujarras or the white villages of Cadiz, one has the curious sensation of arriving to a city that is not only foreign to us but it is specially familiar. A city that welcomes and receives us as if we were at home.  A white and all ranges of blue Andalusian city, with courtyard houses and gabled roofs.  A relaxing microcosm (perhaps that has something to do with the properties that are attributed to blue colour) which is a real pleasure for the senses.

Chefchaouen should be savored and not rushed aimlessly without more committment than enjoying it. And being ready to discover the hidden life to stranger’s eyes set in its interior. The senses are sharpened in search of the secret that makes it so irresistible and suddenly standing next to a bundle of dry wood stacked next to a door covered 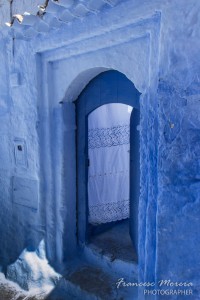 with a “jarapa” that we soon understand it is a bread oven where industrious housewives carry their own daily masses and cook pastries. Sometimes the air delivers us the irresistible scent of a stove and you concentrate in trying to find out from which of those tiny doorways those sweet and spicy scents came. The doors are almost camouflaged in the thick blue walls and almost hidden passing unnoticed. But one looks out shyly, and with a bit of modesty and discovers that around a small courtyard barefoot children play in the shade shielding of the avenging sun while mothers perform their tasks. 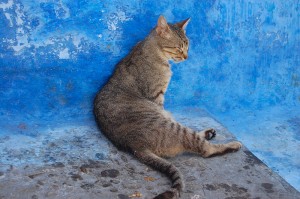 doorway or window and allowing stranger´s hands to do them cuddles. Or give way to a donkey loaded with gas bottles that in some parts has to be pushed by his owner because slips. Or see how a group of ladies fill their water jugs in one of its many public sources. In Chefchaouen is easy to fall spellbound because time seems to move to another speed. It is a comforting and therapeutic pleasure to sit in the old cafeteria of the square Uta el Hamman do exactly the same thing that do their locals, contemplate, leisurely drinking fresh mint tea and let the buzz of the plaza cradle us. Or get us out of our reverie with the singing call to prayer from the main mosque. Or feeling the complaints of our 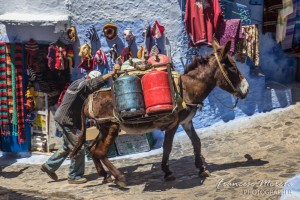 stomachs dinning excellent couscous in Casa Hassan. Or maybe look for the street cart selling snails cooked with spices and chickpeas standing in the same place every evening. If we start from the neuralgic square dominated by the Kasbah and Mosque, shaded by old trees and surrounded by restaurants and cafes, southwards we enter the neighborhood Suika, the most ancient of the Medina where we witness their intense commercial activity. Its sloping streets meander down to Bab el Ain, the most important gateway to the medina from the new city. You will find a mosque of pink doors and a small cemetery in which the tomb of the founder of the city is: Mulay Ben Rachid.

In Suika you will find lots of small shops aimed mainly 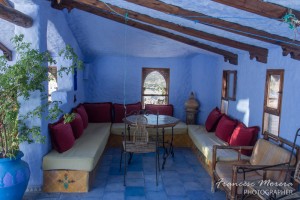 at the local population: groceries, clothing, pickles, nuts, butter, cottage cheese and all kinds of native delicacies. At the gates of many establishments or sitting on the steps of some houses access we can see the Rif’s women exposing their surplus of lands and cows, eggs, herbs, olives and cheese. Most wear their traditional costumes and protect from the sun with striking handkerchiefs and straw hats ornamented with wool. But the best way to see them is in the Berber market that gets outside of the walls one day a week, I remember that on Thursday. The neighborhood extending north to the Mount of the square is is known as the Andalusian district, an area in which there are more housing and a lower volume of

business establishments, but oriented mainly to visitors. Crafts, jewelry and art galleries and stores of colorful rugs and carpets are designed for tourists. The exit of the Medina in the north is by Bab el Ansar. Next to this door there are small waterfalls known as Ras el Ma, a place of rest and meeting for local people. The place is very nice and cool in the evening although waterfalls sure knew better times. At the foot of them are public laundries, exactly like those that you have seen in any small town in the Alpujarras. But what is the history of Chefchaouen which has no choice but to have points of contact with ours?

City of pilgrims, it was founded by Moulay Rachid Ben in 1471, and given its particular setting surrounded by mountains and 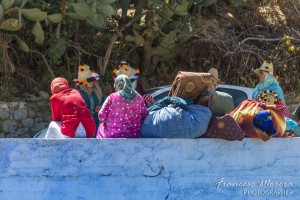 difficult to access, dominated the trade route between Fez and Tetouan and served as a basis to stem the flow and influence of the Portuguese in Ceuta. Met great prosperity between the fifteenth and sixteenth centuries constantly getting Sephardic and Moorish population that had been expelled from Spain. Chefchaouen knew three Andalusian exoduses during the reign of Moulay Rachid Ben and a big exodus in time of his son Mohamed. After the expulsion of Muslims from Andalusia, the city became a replica of Al Andalus in relation to culture and its architecture. Other sources suggest that the city was also inhabited by the Nasrid expelled from Granada, the last Muslim stronghold on the peninsula, which put their efforts to reproduce what they left behind. In 1494, Jews and Muslims refugees settled in Xaouen coming from Granada. Brought with them strong traditions and built using a similar model of any Andalusian village: houses with thick walls, small 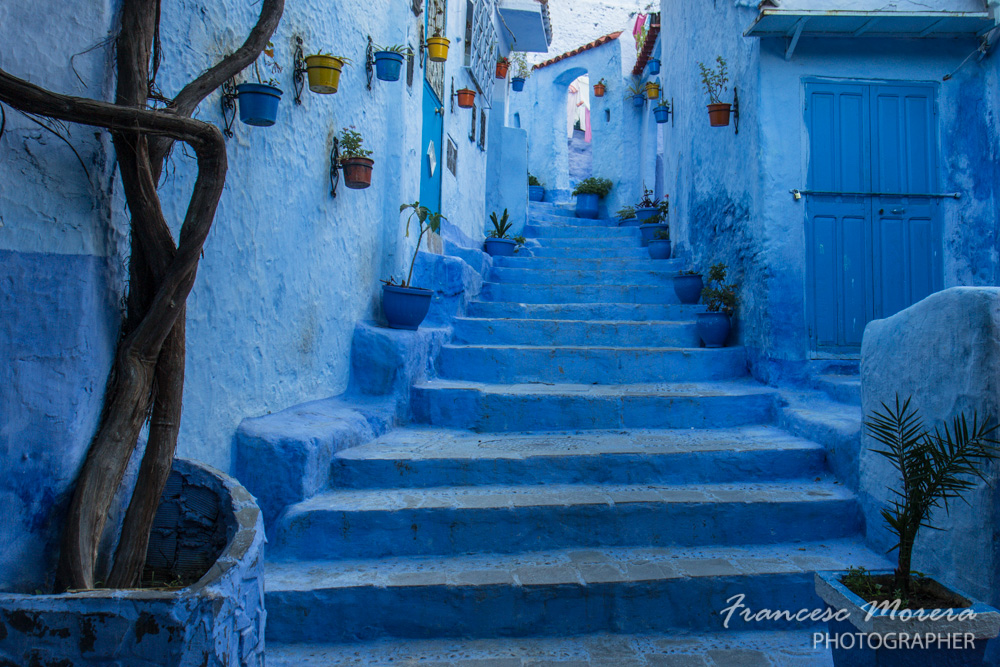 wrought iron balconies, roof tiles, patios with lemon trees. In the sixteenth and seventeenth centuries with the arrival of the Moorish that were fleeing from a new forced conversion and repression after the revolt of the Alpujarras and after their final expulsion, the city continued to grow in successive neighborhoods that climbed the mountainside. Until today the Andalusian quarter is one of the most populous of the medina. But in addition the legend says, and I like the legends, that the city was built as a replica of the Cadiz town of Vejer de la Frontera, because according to tradition, Moulay Ali Ben Rachid had promised his wife Lalla Zahra (a Spanish nobleman who converted to Islam) that the city would look like her hometown, Vejer, and so it was. It is said that soon they became 10,000 inhabitants: 6,000 Moroccan, Andalusian 3,000 and 1,000 Jews. And so, protected by the peaks of the Rif, Chefchaouen remained isolated for centuries. It became the home of all these people who had left everything behind. Considering what they had experienced its inhabitants after the expulsion, and that such affront was hard to forget, being transmitted from father to son, the entry of any Christian under death penalty was banned until 1920, in which Morocco was 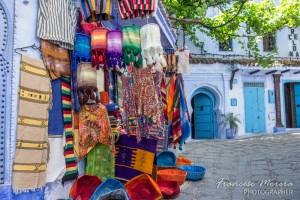 occupied by the Spanish colonial troops. So imagine the surprise of newcomers in 1920 when they found a village where Jews still spoke a variant of the medieval Castilian: the Sephardic. In fact, before the second decade of XX only the ephemeral presence of three foreigners is known in the city attracted by the aura of legend and mystery surrounding her. The first European, who entered, apparently disguised as wandering Jew was the writer Charles de Foucauld in 1883, of the other two only one of them could because the other died poisoned. Anyway, Chefchaouen gives to write several posts so I leave here; I hope to have awaken in you the interest of knowing it.


If you found this article interesting, you can help us to maintain the blog