Sure you’ve all heard at some time of localities at Las Alpujarras as well known as Lanjarón (famous for its medicinal waters), Órgiva (the international and alternative capital of La Alpujarra) Trevelez (the highest village in Spain and the birthplace of their prized hams) or any of the towns that dot the Poqueira ravine (Pampaneira, Bubión and Capileira). All these populations are quite touristic and probably would become the first target of interest when landing here. But I must say that La Alpujarra is made up of many charming villages to discover that extend into the southern foothills of the Sierra Nevada and in the provinces of Granada and Almeria.
Focusing in the province of Granada, today I would like to write about La Taha de Pitres. 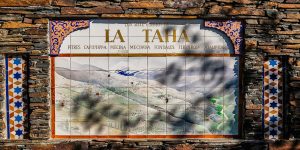 La Taha is an administrative division of Moorish heritage. In this case it consists of 7 villages that share council and public services, and which have a total registered population of just over 800 inhabitants. The municipality of La Taha is located in the High Alpujarra, on the southern slopes of Sierra Nevada betwen Bermejo and Blood canyons, its highest point is at 2,400 m and the lowest just 500 m.

It comprises seven towns: Pitres, Capileirilla, Mecina Fondales, Mecinilla, Fondales, Ferreirola and Atalbéitar. Of these the bulk of the population is concentrated in Pitres. The rest of the villages are located south of Pitres to either side of the Bermejo River except Capileirilla that remains higher. The appearance of these small towns is the typical from the Alpujarras villages, with winding and steep streets adapted to rough terrain and quite uneven, and whitewashed houses with terraos and tinaos surrounded by farmland and mountains.
All those who really want to spend some days in total disconnection should try to stay in this area. There are many well-marked trails and roads that connect with some other populations so it is possible to know the whole area on foot and enjoy of nature, exercise, discovering places and really picturesque corners and of course of the simplicity and proximity of the people. I´m showing some pictures of each of these places for everyone to choose its.

Wikipedia says that its name comes from the Arabic arath albáyṭar meaning ” veterinarian district.” It is a very small town, around a hundred houses, if you neglect you’re out of it. But herein lies its charm, it is like a miniature, and narrow streets and typical constructions of La Alpujarra make us think that the houses are stacked on each other through the terraos and creating ramparts and passageways that protect us from the sun and snow, which are 100% Moorish heritage. At a constructive level it is one of the purest villages retaining most of the features that define this architecture. Most of the streets converge on the square, a meeting point for the just 30 registered inhabitants that at murmuring fountain of three pipes see life go by. It is located at 1150m altitude.

Ferreirola is located on the right bank of the the River Trevélez, at 1002 m above sea level and is one of the oldest settlements in the municipality of La Taha, dating from Roman times. Half hidden between ravines; from far only the church tower gives us a clue of its presence. But once we arrived, on foot or by car we discovered an unsuspected village. Its urban structure is significant and are present the typical structures of these villages, a public utility, (now no longer in use), a public fountain where freshen up, little corners with tinaos, flower-filled terraces, squares…etc. Some of the largest houses have their field garden whose walls stand lemons, persimmons and jasmine trees. Surrounded by countryside, Ferreirola is a crossroads between Atalbéitar, Mecina and Busquístar, around here passes the medieval trail (a 21 kilometers trail used by locals for more than 700 years ago to communicate with Pórtugos, Pitres, Atalbeitar, Busquístar, Nieles or Juviles) and the GR-240 among other routes.

Mecina is the core of the old town of Mecina-Fondales, which consisted of three small towns: Mecina, Fondales and Mecinilla. It is the second town in size and population of the municipality of La Taha. Mecina is built around a common threshing floor, and its streets stretch from here down. As Mecinilla, and Fondales, they retain a large degree of architectural authenticity.

Mecina adjoining neighborhood, but an independent basis. It appears in the modern age as a group of 15 or 20 houses. Really charming and totally respectful with the traditional architecture, is the perfect place from which to meet the other villages in the área.

It is the town that is located more on the “deep” (hence the name), perhaps the least accessible. Its architecture has hardly changed, in it there are plenty of traditional tinaos and porches and a purity of features that make it one of the most visited. Fondales is the town where writer Gerald Brenan set his summer residence.
It has a magnificent medieval bridge over the the Trevélez river. The road running through it is the former official route from Órgiva and gives access to two large cisterns. There are also a source of sour water. The village has many roads that lead to it, from it then connects Mecinilla Mecina and above Pitres, or to the area of Órgiva and Guadalefeo river.
Their threshing floor, little known, are part of the legacy left us by the people of these lands and are now neatly kept by his descendants.

It is the highest nucleus of the municipality (over 1400 m), with exceptional views over La Taha. Its appearance retains the characteristic features of the Alpujarra architecture. Although small, the village preserves all the elements of a population center: well connected by a path from Pitres, another by Aylacares, and two more that unite with Bubión (today through the GR-7), and a final towards the mountains. In the upper town, next to the hotel, there is an astronomical observatory.

It is the capital and geographical center of La Taha, being the largest and most populous of all the towns that comprise the core. The village is divided into several neighborhoods articulated around a large square, which formerly was “parade ground” in the war of rebellion of the Moors in the sixteenth century. Now in it the church built on the foundations of the old mosque rises, highlighting its slender tower that customizes Pitres.