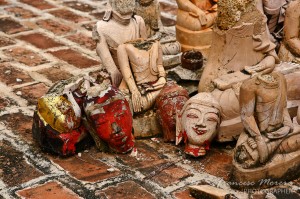 Kakku is about three hours drive from Inle Lake in Shan State hills on the eastern shore of the lake. You do not get here by chance, since it is quite far from the tourist routes.  To be able to visit first you have to stop at the “traveler control center” office and to do some paperwork in Taunggyi, the capital of the state. Once it is done, we will be accompanied by a guide of ethnic Pa-o, the community that manages the foreigners visit in the area.

Taunggyi is a medium size town where you notice there is a lot of trade movement with a strong Chinese presence. It does not have any special charm for foreigners. It is gray, and full of new concrete buildings of dubious taste with some old houses, even some of colonial times. Bridal shops and street markets share the muddy streets. Until 2010 at least, I do not know if this has been changed with the arrival of “democracy” Taunggy was the officially permitted limit for foreigners traveling to the east of Myanmar by road.

For many years its gemstone market was the most famous in the country. They say Taunggyi is the gateway for smuggling from neighboring countries, and the fact is that in the many shops and stalls it is found everything. Our next stop on the road was a small Pa-o village. There are about 600,000 Pa-O people in the country, which maintain their own language and clothing. Its history dates back to 1000 B.C. and after several migrations and even stages of slavery in 1947 rejected the union with Burma and that his state was integrated into the Shan territory. However, they have been integrated into Bamar society (Burman ethnic majority), adopting many of their traditions and their style of dress. Today was a public holiday and people were doing a few days of living together within the p 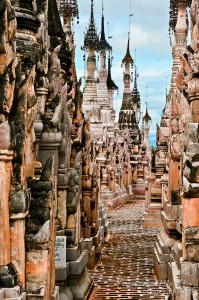 remises of the monastery.  The men are housed on one side, and the women in another, engaging in religious practices for proper fulfillment of the precepts of Buddhism.

All were dressed in their traditional clothes, and found very simple and nice people, quite apart from all that elapses outside the town or monastery limits. We spent some time walking around the town with them and then we return to the road to Kakku with an excellent mouth taste. Not surprisingly that among the poor that are the accesses, and the comments of some guides, that either do not mention or comment that is a dangerous pace for the conflicts between military and ethnic minorities, the lack of tourism is total. A shame but I have to say that very fortunate for us.

The first impression is spectacular, before us unfolds a precinct with over 2,500 stupas aligned. It seems to date from time of the great Emperor Ashoka (300 BC), although the oldest is thought to date before Christ, but the majorities are of s. XVII. The later census conducted in the years 1928, recorded the number as 2548 pagodas.

Wandering through the stupas you can feel a spirituality that impresses. Spent hours walking barefoot through a forest of stone crowned by a host of bells which filled the silence with clinks and you cannot stop thinking how can a country, for half of the world so unknown to shelter so many wonders as this?

Unfortunately the government is carrying out a reconstruction very “sui generis” and severely criticized; painting some of them, making new ones, using new materials… in some areas it looks like a pastiche. That is 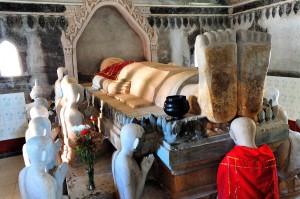 why UNESCO, as happened in Bagan, desisted from working in its rehabilitation, because they do not respect the original construction. But the genuine are wonderful; inside they keep an image of Buddha with offerings. From the outside hardly can be seen in the shadows, but once you enter inside the tiny stay you stumble with them. Inside one of them is the only statue in the country and one of the few in the world that reflects the Buddha´s death.

In a small esplanade we found hundreds of broken stone statues,  formerly they were inside the stupas and according to the guide they were replaced with new ones by devotees, worthless and quite horrible but new. Due to the idiosyncrasies of the faithful Buddhists, an old or dirty temple is something shameful. For them its religious value prevails over the artistic value of the monument, and for them it is not acceptable if it is old or in bad conditions, so they built new and shiny ones. This reflection is only to highlight that if it is not controlled, can wipe out their entire priceless ancient heritage, to be replaced by new constructions. 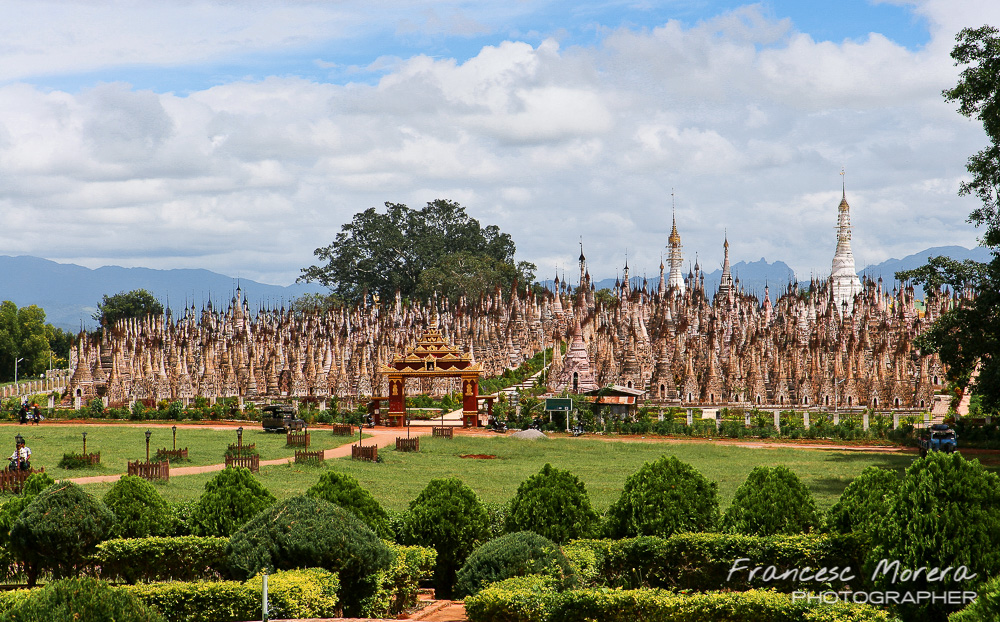 Beyond Kakku we can no longer continue, they say for our security, but the truth is there are lots of hypotheses. Which may have a greater foundation is saying they want to hide that the exploitation of the abundant mines of gems and gold in the area are operated using forced labor. It is also said that the military in this area grow opium to finance the war against ethnic minorities. In any case, this will remain being a mystery for us.

If we had followed our travel guide´s recommendation, we probably would have never discovered this amazing place, but fortunately sometimes intuition leads us in the right direction.