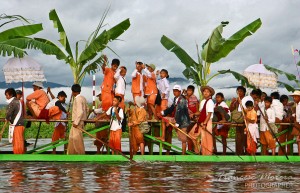 Actually the Kandawgyi Festival is the annual festival of the Phaung Daw Oo Pagoda, the biggest in Inle Lake, this Burma magical place located in the Shan State, where people live in floating villages on the lake itself, and where crops are obtained in small floodplains stolen to it. The intha people have perfected a technique that allows cultivating on the surface of water. Based on successive layers of dry silt, algae or hyacinths, which are renewed every year, have achieved a vast and fertile cultivated land.

The lakeside landscape surrounded by lush mountains is gorgeous and tour the lake in a boat one of the most enjoyable experiences I remember from my trip.

This eighteenth century pagoda, Phaung Daw Oo Pagoda is not the prettiest in its construction, is nevertheless one of the three most venerated pagodas in Burma because keeps inside five very sacred Buddha statues, which by dint of receiving gold leaf offerings for over two hundred years now are shapeless, chubby  and unrecognizable. Indeed, inside the sanctuary you can see a photo of the statues evolution over the years.

Days ago we had been visiting the place and they told us that the famous festival was about to arrive, so we decided to change our flight to Mandalay 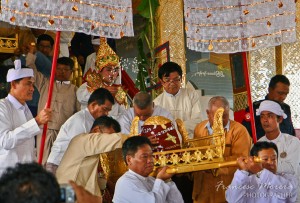 to view it. Dates actually are not marked on the calendar in advance, and the day that begins may vary from year to year because it depends on astral calculations and the phases of the moon. We saw in the first week of October. This festival is made to celebrate the end of the rains and to drive away evil spirits and is celebrated all over the country, although most spectacular view is here  because you can see boat races.

We woke up very ear 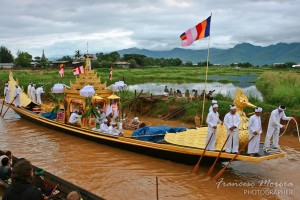 ly; before the sun came up we were installed in the boat towards the pagoda. Along the way, larger boats laden with pilgrims, so happy singing and dancing on top of the boats decorated for the occasion with flags and plants. From a distance we could see the amount of small boats surrounding the pagoda, including the royal barges called Karaweik (The mystical bird) that are carried by the fishermen of the lake and transported to its next destination in other monasteries in the area. These barges, with one of the ends finished as golden chicken were profusely decorated with  ribbons, plants, many gilded ornaments… well, it made me think of the horse carts that go for the Rocío pilgrimage each year, or at the Fiesta del Carmen, so festive, colorful and atmosphere found here.

We landed for the first part of the festival, before they take away the images; they are taken one by one and placed in an altar filled with flowers and food o 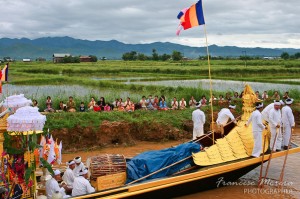 fferings. This moment is expected especially for women, which normally cannot be so close nor touch the Buddha statues. After a few minutes the figures are moved back into the boats to begin their annual pilgrimage lasting several days to other monasteries in other populations of the lake. Well, we should clarify that in fact only four of the five statues will go on procession. Says the legend that in one of these processions around the lake, the barge capsized and fell the images into the depth. After many efforts were recovered only four of them. Very sorry for the loss, they returned to the temple to check that the image that was missing was taking its place, presumably she returned there by their own means … since then that figure is always in the temple and never leaves the premises. Sailing the lake this place where the boat sank is marked with a post that ends in a golden 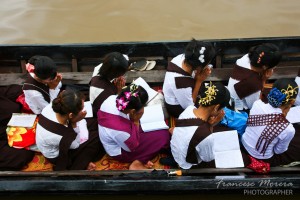 The procession is beautiful, slowly barges flow through the lake, on whose shores they receive prostrate entire families, and are accompanied by private boats and pilgrims dressed in their best clothes  to enjoy the holidays. In all surrounding populations the arrival of the barges is an event, people of all ethnic groups down from their villages to the shore to receive them, and around them entire families follow the procession and make picnic camping, is a nice picture, certainly, these days, you do not work, only enjoy. I advise that if you plan to visit Inle you make it coinciding with the festival, surely will not disappoint. 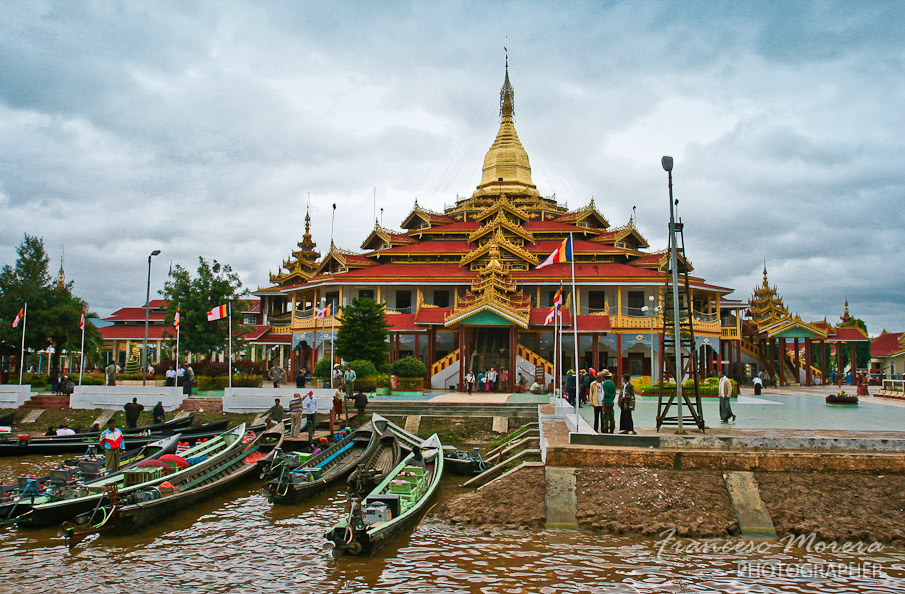