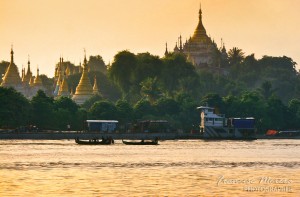 We woke up at dawn to head to the Ayeyarwadi river where we would take a boat from Mandalay to the ancient capital of Bagan, an essential point in the visit of the country as Bagan, with its temples and pagodas dating back more than 1,500 years old is certainly perhaps the most fascinating site for the visitor and one of the most important archaeological sites in Asia, as notorious as the complex of temples of Angkor. The truth is that we have very high expectations, and, at this stage of the journey, with the amount of wonders we have seen, it is difficult to surprise us.

Today many people opt for the plane, but we did choose the “fast” boat ride, which took us about ten hours. This boat only runs two days a week and it was full of tourists. The rest of the week you can take the regular boat line that it takes a few hours more as it stops off at each site, loading merchandise and leaving and picking up passengers. Everything depends on the time available and the interest of each one. As far as I’m concerned, this boat ride was a great choice.

Ayeyarwadi River is one of the basic arteries of the country, and with its 2170 km is one of the longest navigable rivers of Asia, connecting the north and south and irrigating paddies and fields on its wa 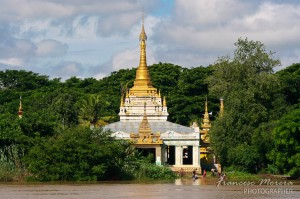 y, giving life to villages along its banks. The writer George Orwell, who served in the British colonial police, said about it that “shone like dragging diamonds” in any case it is a luxury to sit on the deck to enjoy the beautiful landscape shrouded in the mists of dawn, when the ambience is still fresh and displays all sorts of colors and lights between the clouds. Sagaing Hills, semi hidden by wisps of fog, with the tips of its golden pagodas cutting through the vegetation, seemed like fairytale, like suspended between the leaden sky and the river at twilight. We saw sunrise and it was beautiful and relaxing.

Bagan, officially called “Bagan archaeological zone“, is 190 kms south of Mandalay, and about 700 km from Yangon. 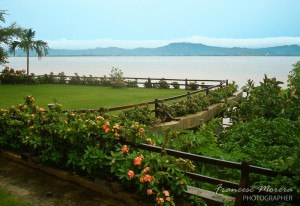 Bagan is magical, breathtaking, unique and extremely beautiful. An unforgettable place that captivates. This site grew from a small regional capital to be the capital of the first Burmese empire when the territory was unified by King Anawratha, which adopted Buddhism and became the official religion of the state. The fact that there is a big concentration of temples in this area responds to their historical circumstances: the king Anawratha conquered in 1057 the Mon state capital of Thaton and brought here the Tripitaka Buddhist scripture, so that the place began to flourish as religious and cultural center at the same time politically. Artisans and scholars of Theravada Buddhism in India, Sri Lanka and Thailand moved here. The kings of Bagan built about twenty temples a year for a period of 230 years, until the plain was abandoned 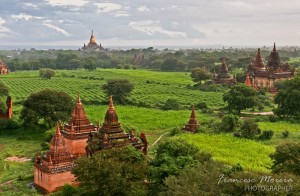 by the thrust of the Mughals. In 1287 the kingdom fell being looted and abandoned. Thus lost its political importance but not its religious and cultural significance. In fact Marco Polo, in a chronicle of 1298 of “The Book of Wonders” described it as “the towers were covered with a layer of gold of a finger of thickness” and that the place was “one of the most beautiful in the world”. The first thing we can only imagine, but the second definitely subscribe.

Within the territory of Bagan distinguishes between the area known as Old Bagan, New Bagan and Nyaung U.

Up into the nineties, people lived in Old Bagan, among the temples, living from fishing and farming and grazing fields surrounding it, but were transferred overnight to New Bagan site. The authorities wanted to keep the photogenic of the area and did not want the visitors would see the real way of life. Today the land is still grown, mainly peanut planting, so if you go before the ground starts to dry after the mo

nsoon, you will see that everything is pure green. Finally Nyaung U is the largest town in the area, is located about 5 km northeast of Old Bagan, here are a variety of accommodation, restaurants and cafes, but for my taste lacks any interest or charm.

As we want to be as close as possible to the main temple area, we will stay in Old Bagan, the heart of the archaeological zone, within the city walls and surrounded by the main temples. We stayed in a charming bungalow with a beautiful pergola situated on the shore of the Ayeyarwadi River. The hotels in this area are not the newest, but are the best placed and therefore the most expensive.

Once installed, all I wanted was to start seeing things, just because we had two hours of sun. Bagan area occupies over 41 square kilometers, so we could have spent days and days running through it, but since our time is limited to three days, we decided to organize. The first day we opted for renting a car to see the more remote temples and localities of Nyaung U and Myinkaba, where they make the famous lacquer ware items in the

country. The second day we rented some bikes, and is an experience I recommend to everyone. It is a joy to travel the roads a little of free will and letting surprises arise as we passed. Shepherds with herds of goats, cattle, ducks, peasants working the fields, children playing in the temples… It is impossible to see all the temples, so I will only mention some of them which I will discuss in detail in future entries, Ananda, Thatbyinnyu, Dhammayangyi, Gawdawpalin, Shwezigon, Sulamani, Htilominlo, Manuha, Pyathadar, etc, etc

Bicycles let you run away from organized groups, and being alone wherever we were, sitting on the terrace of a temple or resting inside. 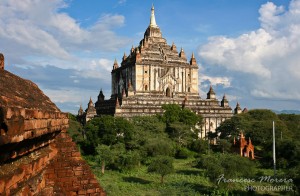 The third day we combine both transport because dedicate half a day to visit Mount Popa.

Bagan is not nowadays a World Heritage Site because of the military junta, refusing to follow the guidelines set by Unesco necessary for the preservation and restoration of the site. But I can assure that the site deserves the distinction of leftovers. It is desirable to reach an understanding because in the few temples where Unesco intervened before being asked to leave, the restoration work is excellent. And the restoration works carried out by the government are infamous. Restoration standards, as we have seen in other sites like Kakku or Indein, not only

have not been respected, but have used modern materials and techniques. Even worse, we can see that they have continued building new stupas near the old, creating horrendous compositions.