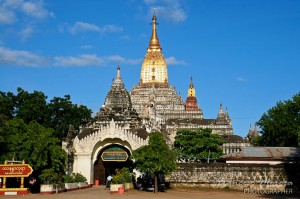 Before the fall of Bagan, the capital came to own about 5000 temples, of which there are currently around 2000 census, among the most popular to the less known temples. Many remain, and you only have to climb to the terrace of any of them to see the landscape sprinkled with buildings, mostly red brick and stone.

Ananda Temple was the first one we visited, and we dedicated to it  more time because it is considered a masterpiece of the architecture, in this case the people of Mon architecture. It is said that this perfectly proportioned temple was built in 1105 by King Kyanzittha. It is the best preserved and most venerated of the Bagan temples, despite the fact that was s 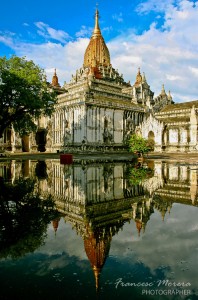 eriously damaged in the great earthquake of 1975, and his golden needle makes it easily identifiable among others. Some say that the name of the temple is in honor of the faithful disciple of Buddha and personal secretary, his cousin Ananda, and some say that the word “Ananda“, here is a derivation from Sanskrit meaning “very beautiful“. Can be a very valid explanation for the temple is more than just a building. Inside you can see beautiful examples of all Burmese arts: sculpture in stone, stucco, windows glazed, terracotta, wood carving, and art of forging… The ground plan is in the form of a cross with four devotional halls, each on one side, facing four cardinal directions, and the main structure in the center. In Bagan there are’ only two Temples with such ground plan. The other Temple of this type is 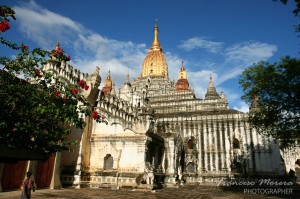 Dhammayangyi althoughthey are very different on the outside, Ananda is regularly whitewashed and Dhammayangyi is made of brick. It denotes he stylistic end of the Early Bagan period and the beginning of the Middle period and Ananda is the model for latter constructions. Why this temple is so different from the other rests on a curious legend that tells how the king received the inspiration for its construction.  It says that 8 monks came one day to the palace Kyanzittha begging alms. They told the king that once had lived in the temple cave of Nandamula in the Himalayas. The king was fascinated by the tales and stories narrated by the monks and invited them to return to his palace 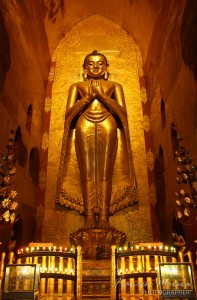 repeatedly. The monks with their meditative powers showed the king the mythical landscape of where they came from. King Kyanzittha he was overwhelmed with the vision and then had the desire to build a temple to remember that landscape, a temple that would keep the inside cool despite being in the middle of the plain of Bagan. After the construction of the temple, the king executed and architects to ensure that the style of the temple would be unique and so it has. One of the things that attract attention are the four huge golden Buddha statues of solid teak that we find inside, very similar, but different. They represent the Buddha who has reached nirvana. Two of them were replaced after being consumed by fire, and the other two are original, facing north and south. These show a mudra or hand position symbolizing the Buddha’s first sermon, which is known as Dhammacakka and a funny thing happens to them, if we look at the statue up close, it gives the feeling of having a sad expression on the face, but when we move away 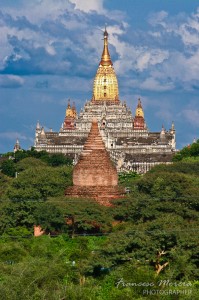 Anyway, I do not insist with many data, what really counts in the end is the impression that this site causes in people, and I can say that walking through its shadowy corridors and gazing from the outside patio one knows is at a special site, full of history and legend. No one will be disappointed.

Its annual temple festival falls on the full moon of Pyatho (usually between December and January, according to the Lunar Calendar). The festival attracts thousands of locals from near and far. Up to a thousand monks chant day and night during the three days of the festival so if one decides to visit Bagan at this time you can enjoy it.