It is difficult to make a selection of the temples in Bagan as they all have special characteristics that make them unique, and therefore I shall not be very objective if I 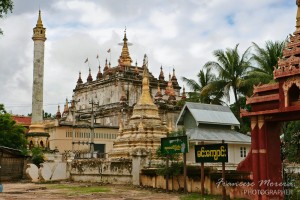 choose one instead of another, so I have decided to write about those who have some curious story behind or that have more special features or art forms of construction. This is the case of Mon’s King Manuha temple. This temple does not draw much attention for its stone exterior, but by the content that contains inside. I mean the huge statues of Buddha, who seem totally oversized relative to its interior space.

To find out the reason for the exaggerated size of them it is necessary to look in the history of Bagan. This temple bears the name of the mon king of Thaton, who was captured and taken as prisioner by King Anawratha that you might remember, sacked the city of Thaton despoiling the Tripitaka Buddhist scriptures, starting so with the  flowering of the city of Bagan. 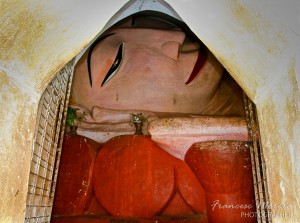 Given that ancient Burmese kings made not prisoners, King Anawratha made an exception in a display of unusual compassion, holding captive in Bagan to the reviled king Manuha, which, like many other devotees of noble families were allowed to build this temple in 1059 as an offering. It reflected his mood afflicted by captivity. 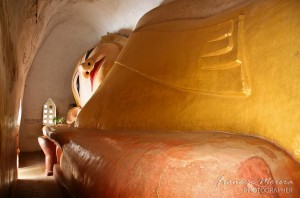 In the front of the temple there are 3 large sitting Buddhas statues of about fifteen meter high and in the back there is another huge reclined one in the Parinibbana position (the act of entering death). They all seem too big and their uncomfortable positions are said to represent the stress and lack of comfort that the king captive endured. In fact, it is a bit overwhelming to get around inside because you really do not see the complete figures because of their size.

One can climb to the top of the pagoda through the stairs located at the entrance to the chamber of the reclining Buddha, in the back of the temple 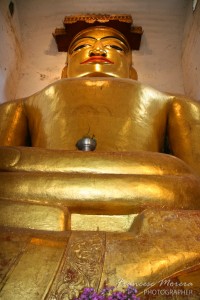 and through an upper window you can see the face of the gigantic Buddha sitting with a huge smile. That same statue had a grim expression from below, but the expression switches when taking another perspective, phenomenon that we observed with the oldest statues in the Ananda temple. The tightness is transmitted to the visitor; it becomes palpable the discomfort that Manuha wanted to convey.

During the earthquake of 1975, the central roof collapsed, badly damaging the largest, seated Buddha, which has since been repaired. An outdoor corner of the temple compound is dedicated to Mt Popa’s presiding nats, Mae Wunna. Devotees of Manuha Paya celebrate a large paya pwe (or pagoda festival) on the full moon of Tabaung (which falls between February and March, depending on the Lunar Calendar).