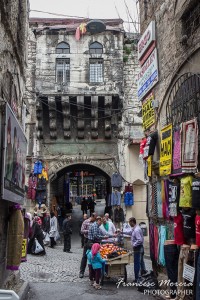 If anyone doubts that Istanbul is a city in which having the sense of adventure and exploration is still posible, simply enter the maze of streets and lanes that extend and branch out as a large open market communicating the Grand Bazaar with Tahtakale market. The whole city is plenty of curious places and full of history that will be at your fingertips if you dare to leave the beaten track, crossing the passage leading away from the bustle, entering into that courtyard that can be glimpsed in the background or climbing the stone steps you do not know well where it will lead you to. They are spaces that seem to mimic among the many shops and people crowding the streets, so if you are not seeking them will go unnoticed.

Of course, you have to be careful and respectful. I insist on it because the vast majority of these places are around very commercial streets, but in very old fifteenth century and later buildings, which are in poor conditions. When entering these places one has to be clear that you do so at your own risk.
I refer to the Han, who are still home of a thousand different guilds and in whose dark stays artisans make all kinds of items that soon will see displayed for sale on the streets. 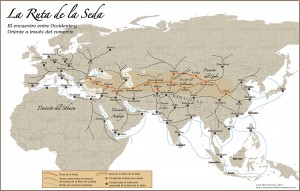 But what are the Han (pronounced jans)? The origin of the khans, hans, or caravanserais, as you like, was the Silk Road. At first they were buildings that provided shelter or refuge for the caravans of merchants, pilgrims and soldiers who circulated through this mythical first “highway of commerce” which ran through Eurasia by contacting the markets of cities in Europe with distant and proverbially unknown lands. In all the cities on this route, therefore you shall find it. In the westernmost branch of the Silk Road, several paths journeyed from Istanbul to head towards the Mediterranean and north of Europe, whose markets received enthusiastically exotic and oriental products. That is the reason why there are son many hans in Istanbul. However, everything passes, and with the rise of maritime commerce, these buildings were lapsed and forgotten.

Istanbul is full of hans, which throughout the centuries have been recycled for various 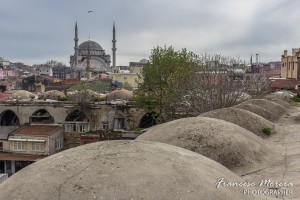 uses, you just have to wander around the area of markets for meet them. More clearly when the shops have closed. And you see, there are dozens. Some are in very old brick Ottoman buildings with small grey domes, and whose access is through a huge wooden door. Others in newer buildings. Historically, the most important in Istanbul was the Büyük Valide Han (Han of the Queen Mother) 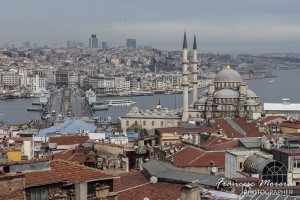 commissioned in 1651 by the Valide (Queen Mother) Sultan Kösem to finance maintenance of the beautiful Çinili Camii, or Tiles Mosque. This was used to store goods from the ships in the Golden Horn and as an inn for merchants. One of the most curious urban legends about the Büyük Valide Han tells the fact that Kösem Sultan hid all her jewels in the depths of the Byzantine tower that now seems an extension of the building. Since then, countless treasure hunters have visited the han, before and after the invention of metal detectors.
The Hans are normally distributed around one or more courtyards and have two or three heights. Büyük Valide Han is like that as well. Inside you find piled up goods, many junks and artisans performing their jobs in an almost novelistic atmosphere. So much that has already been the scene of some movies like “The Water diviner” or “007 Skyfall”.

I had read that it was possible to access the roof, and thinking how awesome it would be the views, we set out to find it. A task of “location” and “research” that paid off, not only to locate the place but to get find the person in charge of the key that would allow us to raise the roof. We had written a short speech in Turkish in which we mentioned we were looking for this person, and asking here and there we met him. We accompanied elderly Mr. Mehdi Bey to what seemed an office, so old and dusty as the same building. There he kept dozens of keys. 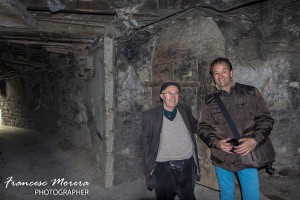 If you wish to climb, the first you have to do is find him. He will not ask you for anything, but a small tip (5TL-10TL) is always welcome in compensation for the inconveniences and for his time and because as you will check the views are memorable and well worth it.

The condition of the roof is really worrying, skylights are broken and patched with various materials threaten to collapse if one steps on, and weeds grows from every crack that time has inflicted on the building but the views of the city, the Bosphorus, and especially of the buildings of the bazaar are privileged, for the perspectivet and 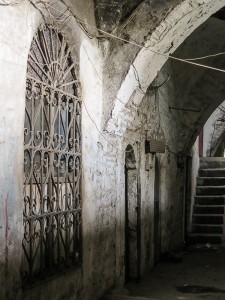 because obviously there will be nobody but you. In a half-ruined room we found a huge abandoned weaving loom covered with dust and dirt. Mr. Mehdi Bey, bearing fifty years living and working here, who made his attempts to communicate, commented regretfully as the arrival of mechanization and products made in China, had ended dramatically with that activity. The han is still a working building mainly occupied by metalworkers as turners, polishers, foundry men and jewelers, and for small sewing workshops (manufacturers of hats, ironers, and a dyer) but the rhythmic sound of the huge looms is now only a distant echo. Only this museum piece testifies that time. 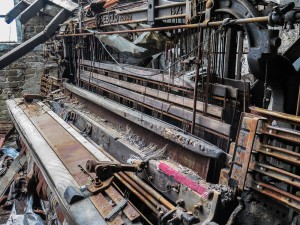 Witnesses of the past half century at Büyük Valide Han recall the presence of leather workers, dyers, carpet weavers, traders, manufacturers of cardboard. Today, the few shops in it sell wholesale clothing and other products. On the second floor, pretty grim, where most of the dwellings are empty and closed up tight, few workshops still operating. Here are the workshops of metal workers and press rooms. Some have been in between 30 and 40 years.

If you are interested just across the Büyük Valide Han, there are two other large hans, Büyük and Küçük Yeni Yeni Han, both of the eighteenth century. And for those that are willing for more, a book: Istanbul’s Bazaar Quarter, by Edda Renker Weissenbacher and Ann Marie Mershon, with different routes by the hans of Grand Bazaar.