You do not have to think too much to find an adjective that defines to Florence, there are many, but for me it would be beautiful, this is a city that oozes beauty and romance on all four sides, in its streets, buildings, landscapes, and that has an artistic environment hard to forget.

The first night I spent in this city, we went for a walk along the riverbank, between the bridge of the Trinitá and bridge Vecchio, it was winter and from the Arno, a wet mist faded and enveloped the shore giving to the scene, if possible, even more charm.

The downtown shopping streets, as happens in all cities, were very lonely, and did appreciate the extra light coming out of the store windows. 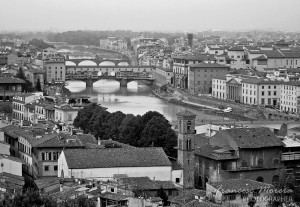 Near the Ponte Vecchio I noticed the people who chatted resting on the brick railing of the river, outside the trendy bars, slowly drinking wine, ( yes, not liters of alcohol) conversing and flirting, and reminded me very much to one of those advertisement of drinks, you know, “dolce vita”, girls and handsome boys suffering for the sake of fashion, the ni 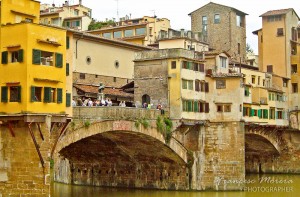 ght is young…The Ponte Vecchio was illuminated and  I thought that it was a captivating city like no other.

Florence center is small and easy to reach by walking, and really everything is pretty handy. Even if you walked without a guide or map is sure you would arrive to the most interesting places anyway. The city or historic center is divided by the Arno River which is crossed by six bridges, the most famous that also connects you directly with the Palazzo Pitti is the Ponte V 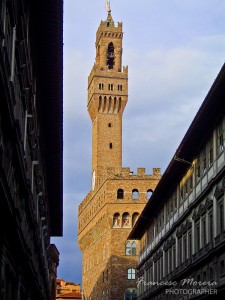 ecchio, the most photogenic and beautiful of all them. The bridge was the area where once they were the leather tanners, but today it is full of jewelry shops for tourists which impregnated with the romance of this city will have committed more than one an expensive madness of love. Additionally, the Medicis ordered the construction of a gallery on the bridge deck, known as the Vasari Corridor, which connected the Palazzo Vecchio with the Palazzo Pitti.

The center is pedestrianized in some streets, ideal for leisurely walks. Florence is a very flat city, the buildings are rather low. You do not have to be a scholar to appreciate what the city offers; I kept excited every time it appeared some of these wonders that had seen only in art books. Yes, there i 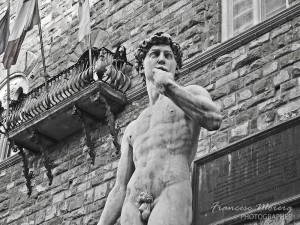 s no doubt that we are in one of the birthplaces of world art and architecture. And of the history, the period of greatest splendor of the capital of Tuscany is the one that matches the power of the Medicis, Cosimo, Piero, Lorenzo, and the latter was a great patron of the arts who commissioned works by Michelangelo teachers, Leonardo Da Vinci and Botticelli among others. But dozens of geniuses of all disciplines contributed to make this the Renaissance and the culture city, becoming a reevaluation of medieval values, resulting in the development of a more humanistic culture. To mention some artists: Vasari, Raphael, Botticelli, Piero della Francesca, Donatello, Giotto, Bramante Brunelleschi, Alberti, Dante, Galileo, Machiavelli or Boccaccio among others. Their sculptures can be seen adorning the outside of the Gallery of Uff 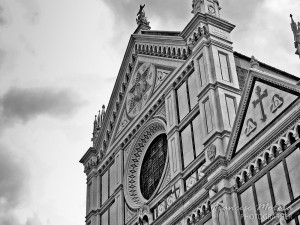 icci. Many of them are buried in the Church of Santa Crocce, who always was a status symbol for the city of Florence and a meeting place for the greatest artists, theologians, religious, political and literary men.

The heart of the city is the Piazza della Signoria, where once there were feasts and important public competitions. Here it is the Palazzo Vecchio, the old city hall since medieval times, and, of course, the Uffizi Gallery, one of the most important museums in Italy where the queues to enter challenge the patience of 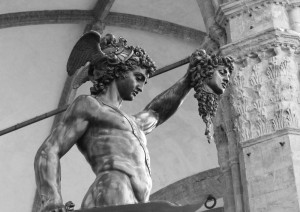 any. In this square of the Palazzo Vecchio they burned in the bonfire for heresy to the monk Savonarola, and there is plenty art to behold if you decide to enter at the Uffizi Gallery. The front door of the Palazzo Vecchio is chaired by a replica of The David, (to see the original should go to the Accademia Gallery, where it is well protected from vandalism), and the statue of Hercules and Cacus. Opposite there is a covered porch, which is known as La Loggia dei Lanzi exhibiting various universal sculptures as “The Rape of the Sabine Women”, or “Perseus”, victorious with the decapitated head of Medusa. This last one made a particular impression on me as in my h 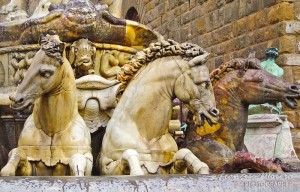 ouse there has always been a monograph of Benvenuto Cellini, and the photograph of this sculpture was on the cover, and for a moment I could observe in great detail. But in the square we also have the Neptune Fountain, where a stunning Neptune emerges from the waters thrown by a furious group of horses. The stress and strain are so real that the horses have marked veins.  Just one minute from here is another place so famous or even more if possible, the Piazza del Duomo, where we find the most important religious buildings in the city.

The Baptistery, with its heavenly burnished bronze doors that it is said is the gates of paradise, the Cathedral of Santa Maria del Fiore and Giotto’s bell tower. This cathedral, famous for Brunelleschi’s dome, was built on a previous one that had become too small, the cathedral of Santa Reparata. Everything had to be demolished and other houses in addition to have a site that had the desired dimensions, the cathedral gives the feeling of being boxed into the square, and it is necessary to give many turns to find an angle from which to take a decent picture, because you cannot take it entirely. The outside of the same is made of white marble, green and pink, but due to traffic smoke always looks brownish, are not nearly appreciated  geometric patterns or color. On the two occasions I have visited the city they were 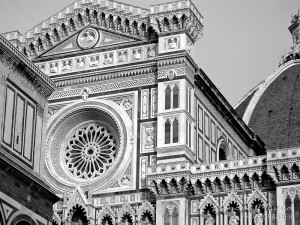 cleaning up the facade, so the Florentines say that when just one side of the facade is ready they have to start cleaning the other. The Baptistery of San Juan has the same problem. The Baptistery is much older than the cathedral, dating from the fifth century and from 1128 where children were baptized in the city. The three doors are covered with bronze panels with scenes from the Old Testament, the life of Jesus, or the four cardinal virtues, a Pisano and Ghiberti work that is fantastic and deserves all our attention. The best views of Florence are in Piazzale Michelangelo, a square or panorami

c viewpoint on the southern flank of the Arno from which to admire the city. Long ago, when some nobleman was sent into exile they were sent to the hills and prevented from entering the city, which is why you will find beautiful palatial residences around. The views are magnificent, a postcard, the dome of the Duomo, Giotto’s bell or the Signoria excel between buildings and … magic! We just have to reach out a hand to touch them. The river flows between the bridges and there is a good view of the shore as far as the eye. View from here the sun is the perfect way to remember the city.