A cold sweat wraps him and the blood and his heartbeats hit strongly on his temples. Is it 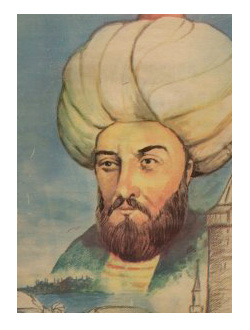 vertigo that strong nausea that grips his stomach or merely terror? From the top terrace of the Galata tower, in Istanbul, which crowns the defensive stronghold of the Genoese everything is seen otherwise. The populous city lies at his feet, but in the solitude of the heights, only surround him the clouds and birds. He has spent years studying them, trying to understand how they keep in the air and documenting his studies with thousands of drawings and calculations. Has self-built a suit with unusual mechanisms that actionate a pair of natural wings made of 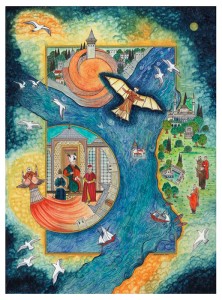 eagle feathers waterproofed with wax and designed in the image and likeness of birds that he hopes will allow him not only float in the air but to address its course. They have failed countless times, proof-test is his religion, and finally, the auspicious day has arrived. Hezarfen takes a deep breath, picks up momentum and jumps, saving the more than one hundred meters of altitude over the sea and achieving the feat of crossing the Bosphorus strait planning and landing safely on the other ban. Given that it is on another continent, makes it also the first self propelled intercontinental flight.

Inspired by the legend of Icarus and the sketches of Leonardo da Vinci, this young historian and Ottoman erudite nicknamed Hezarfen “Man with thousands of sciences” made nine failed attempts at flight from the highest peaks on the city before summon the courage to take the final leap. In 1632, during the last stage of the Sultanate of Murad IV (c. 1640) he rose to the top of Galata Tower intending to fly across the Istanbul Strait which links the Black Sea to the Marmara Sea by his own means. We have

no an accurate data. The events were reported by the great Ottoman traveler and writer Evliya Çelebi who said he did it after “eight or nine flapping” and taking advantage downwind, landing in the square of Doğancılar on the Asian shore of Üsküdar to 3,358 m. So Hezarfen became “the first son of God” who managed to cross flying over the sea from one continent to another also.

Among his audience was the Sultan Murad IV, watching from the Sinan Pasha mansion in Sarayburnu, who enthusiastically praised and rewarded him. But surely by the jealousy or just because a figure like this could be very dangerous soon this achievement was seen as a threat, being branded an heretic by conservative and religious sectors of society. The Sultan, the same who had rewarded with a bag of gold coins, following the advice of his advisors did not hesitate to invent a mission in Algeria, away from the Ottoman capital and his scientific tests.

Hezarfen, the first bird man in the history of mankind and the most important in the history of Turkish aviation died in exile in Algeria in 1640 at the age of 31. Today, just a small plaque in the hall on the seventh floor of the Galata tower, remind us the feat that a man without fear carried out. In addition, an aerodrome located in Istanbul Çatalca is named Sage Ahmet Çelebi Hezarfen in his memory.