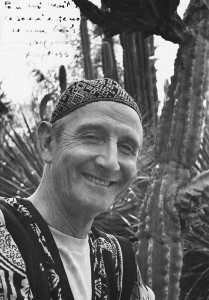 The Majorelle Gardens in the imperial city of Marrakech is one of the most enjoyable tours that can be done in the red city. Especially if you have already been immersed in its chaos for some days, wandering every nooks and crannies and the labyrinthine alleys of the Medina, visiting souks or immersed into the crowds. It is ideal for slow down the pace, find calm and recharge our energy. The gardens are located in one of the most exclusive areas of the city: Gueliz, in the district of Hivernage, and to reach them you will walk for the spacious, clean lined avenues plenty of gardens and hotels that seem a world light years ahead of the other Marrakech that we have just left behind, that one closer to the Arabian Nights that can transport us in time and that constantly bombards the senses.

Passing his door is to enter a world of nuances of light and color, a green oasis that definitely surprises for the unexpected. The Majorelle Garden is the closest thing to an oasis, blue and pure in this town with red adobe soul that is Marrakech. These gardens, formerly known as the gardens Bou Saf were designed by a French artist in the days of the protectorate, Jacques Majorelle, which reached Marraketch in 1917 invited by General Lyautey, a friend of his family, like many other Europeans of the time to recover from their health problems in a drier and warmer climate. 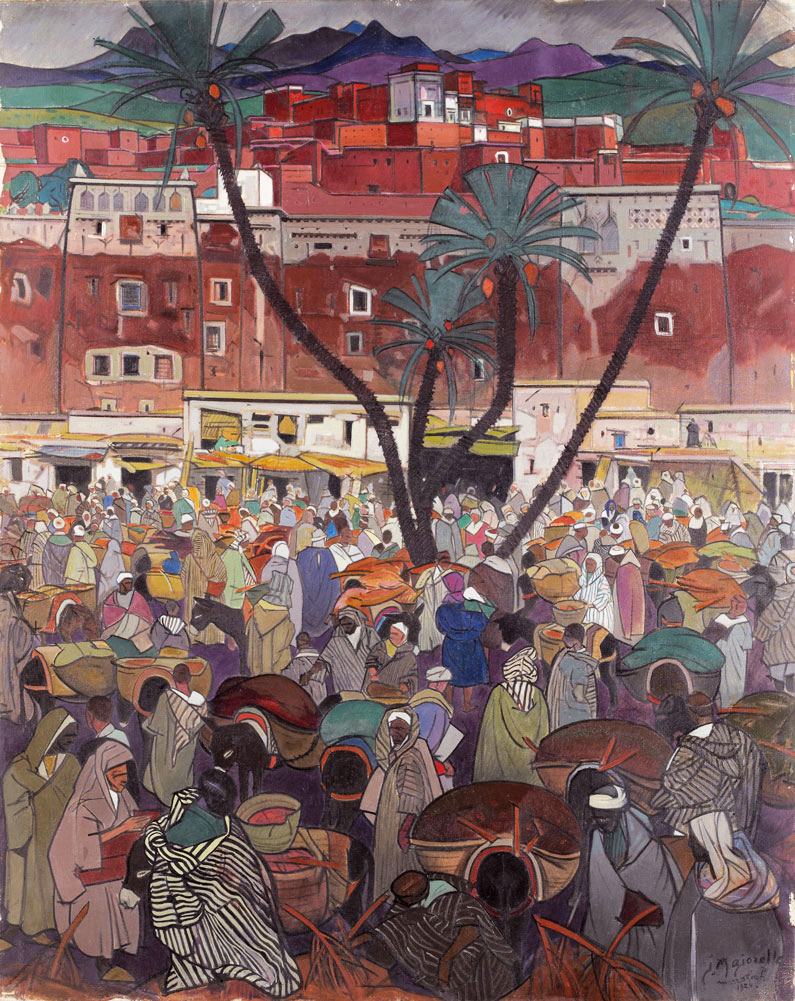 For some time, the city was his point of departure for numerous excursions to Africa, before moving permanently here in 1919 with his wife. Jaques soon fell in love with the city, its lights, colors, and way of life, which became a constant source of inspiration for him. His canvases are remnants of this Marrakech that so much fascinated him. The couple first lived in a small house within the medina, not far from the Djemaa el Fna square, and then at the Ben Daoud Pasha palace. Later, in 1923 Jacques acquired a palm tree farm where would build his home and workshop, around which would project what is now 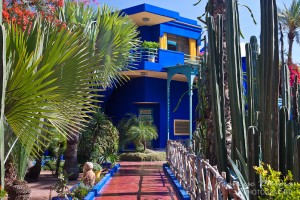 known as Majorelle Gardens. Throughout nearly forty years, this fertile palm grove was incorporating in perfect harmony plants worldwide up to become a botanical treasure just a few miles from one of the most voracious deserts. These gardens, not too long to be a botanical garden, with only three acres of land were populated with exotic species brought from his travels around the world: cactus, yucca, lilies, nympheas, jasmine, multicolored bougainvillea, 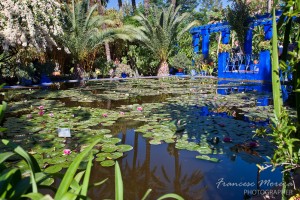 palm trees, coconuts, nasturtiums geraniums, banana, bamboo as well as more than fifteen species of birds, all adorned with ponds covered with water lilies, fountains, arbors, and ceramics. This is undoubtedly his most recognizable and eternal work and I think everyone who visit feels trapped by it. Maybe because all the details and corners of the garden seem an extensive living canvas. In fact, the Majorelle garden and its buildings are embellished by an intense shade of cobalt blue which was created by the artist himself and that is omnipresent across the garden, I mean the Blue Majorelle.  When in 1937 Majorelle created this color, deep blue, purple and very saturated, painted with it the walls of his studio. 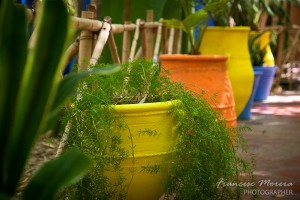 Liked so much the color contrast with the green of the vegetation that also painted in blue the pergola, jars and bowls adorning the three-hectare botanical garden. Thus, when the garden was open to the public, the blue Majorelle had invaded everything, becoming, forever, in the most prominent hallmark of the garden. This blue works really well with the weather, plants and flooring, and other strong colors that are found in every corner of the garden. Maybe it should not surprise us since it was created by a painter. The gardens were opened to the public in 1947 and after a golden age began to suffer a great decline, as Jacques was the victim of a serious car accident in 1955. Several operations and the amputation of his left leg worsened their financial situation to the point that in 1961 he was forced to sell his share of the garden and villa-studio. After a second accident a few months later, Jacques Majorelle was evacuated to France, where he died in Paris in October 1962, without even saying goodbye to 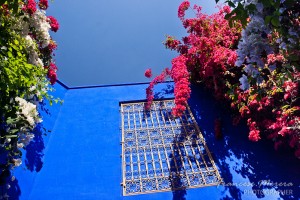 the city he loved and where he had spent the best moments of his personal and artistic life. And so the gardens were falling into oblivion … until back in the early eighties Yves Saint Laurent and Pierre Bergé, who were admirers of the work of Majorelle decided to acquire and restore it. And they were later donated to the city. In 2001 they created a foundation to ensure its maintenance and preservation and in addition today in what it used to be the artist’s studio is the home to the Marrakech Museum of Islamic Art.