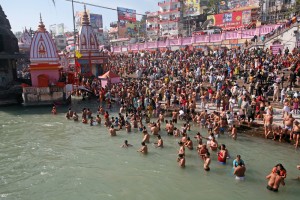 The Kumbh Mela is one of the major religious celebrations of Hinduism, and also the busiest one of the existing around the world. It’s a gigantic meeting of crowd in the banks of the Ganges, whose waters are believed to become, at the time appointed by astrologers, in holy nectar that everyone wants to drink and is able to wash away sins; this common rite involves the whole India. Hindus believe that when immersed in the water will be absolved of all their sins, they and their 88 previous generations, with such a reward not surprising that it is a meeting so crowded.

This festival is a pilgrimage that takes place every three years in four different locations that have in common to be in four different locations of the Ganges, four cities that are considered sacred: Haridwar, Allahabad, Nasik and Ujjain, and is based on a legend that is one of the fundamental myths of Hinduism, the “Churning of the ocean of milk.” According to it, the gods and demons were allied with the intention of creating amrita, the nectar of immortality. Once they got their purpose the jar containing the amrita was stolen by demons, causing a divine battle that lasted twelve days and twelve nights, equivalent to twelve human years. During this battle, several drops of amrita fell on four sites, Allahabad, Haridwar, Ujjain and Nasik, the four cities where the Kumbh Mela is held.

The next Kumbha Mela will 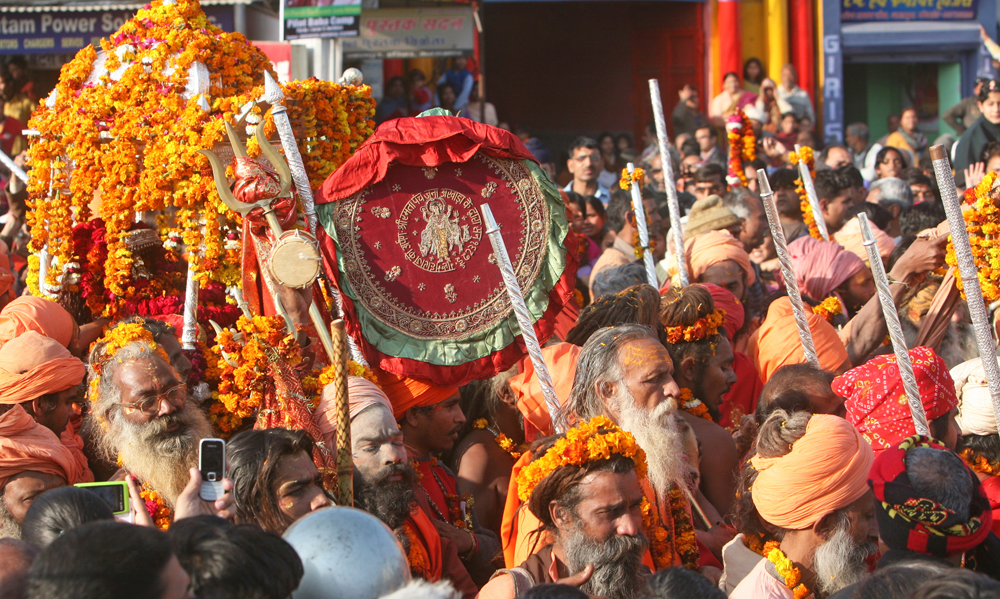 be in Allahabad, in 2013. The exact date depends on astrological calculations, according to astrologers, the Kumbh Mela takes place when the planet Jupiter enters Aquarius and the Sun enters Aries but it will be in late January. Officially lasts a month, but the fact is that extends to three months. As I said before, the Kumbh Mela is held in each of the four holy cities every three years, but the largest meeting and holiest takes place in Allahabad every twelve years, at the confluence of the rivers Ganges, Yamuna and Saraswati. This next year will be attended by more than 100 million! visitors. I cannot imagine what it will be that, in the last ceremony of 2005 in which Ratzinger addressed to the faithful in St. Peter’s Square, following his appointment as the new pope, they talked about a million attendees, and was an uncontrollable tide.

Millions of pilgrims, from all regions and castes, and different sects of sadhus congregate along the river and remain camped there for weeks. Organize coe 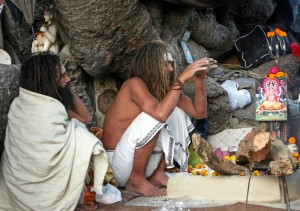 xistence and wholesomeness of the crowd, and, above all, to protect from itself is a challenge every festival. In Haridwar Kumbh Mela held in 2010 were erected six hospitals, three hundred and sixty medical ambulances … and twenty thousand soldiers and police trying to gain control of a monumental temporary refugee camp. And is that coexistence between different sects is not usu 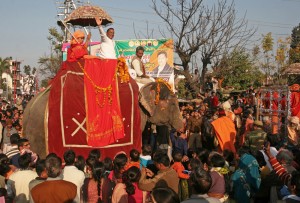 ally peaceful and each group struggles to be the best place to access the Ganges, the use of cannabis further complicates the situation by unleashing the religious or worldly emotions and controlling the masses is a difficult task. In all editions are avalanches and there are people killed by crushing.

It is undoubtedly a world. On the dates that are considered favorable for swimming, there are processions and ceremonial parades of sages, saints and yogis. These illustrious personalities go on carts, on donkeys, elephants and other traditional modes of transport. When advancing int 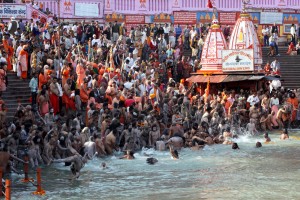 o the crowd, these “radiate” people positive vibrations and blessings. After the saints, yogis and sages have bathed, the other people who have come to participate in the Kumbh Mela addresses the Ganges River to do the same, and there are millions.

Vikram Seth described the festival in his book “A Suitable Boy” like this:

“They wore woven bags, shovels and buckets, stakes, flags, feathers and large marigold garlands. Some were suffering from the heat and fatigue. Others sang as if in a snack, or singing bhajan and other sacred songs, because the excitement of watching the mother Ganges removed the jet lag at a time. Men, women and children, old and young, black and clear, rich and poor, Brahmins and untouchables, Tamil and Kashmiri, sadhus in saffron dresses and naked naga sadhus rested on the sand all along the streets. The smell of incense, marijuana, sweat and food: the crying of children, the megaphones that whistled, women who sang Kirtan and policemen shouting; the sight of the sun sparkling on the Ganges and the sand faded into small whirlwinds where there were people, all conspired to infuse a sense of compelling euphoria. I felt that there was something I was looking for, or The Something I was looking for. It was the universe in a microcosm. Somewhere, in the tumult, there was the peace. “