Mandalay, located 715 km in northernYangon is Burma‘s second largest city with a population of over 1 million inhabitants. Although its name evokes in us the idea of ancient kingdoms, the city only dates from 1857 when the penultimate Burmese king Mindon moved the capital here and also where the English at the same time sent into exile the last of the Burmese kings, Thibau in 1885, beginning the stage of British colonialism that lasted for decades. Today it is a prosperous market town with its proximity to the main arterial 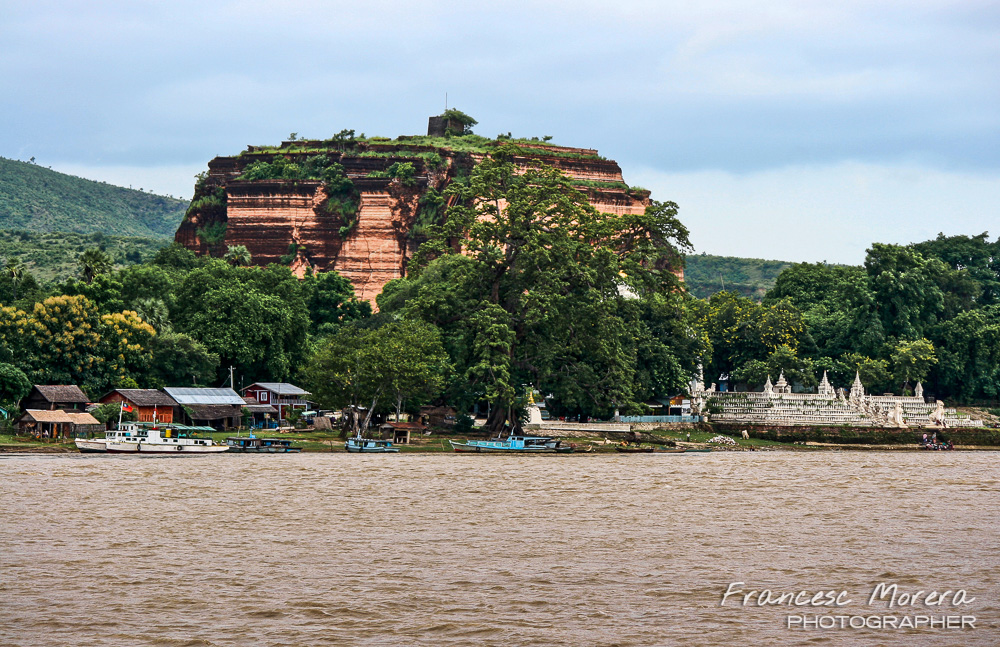 road which connects the country with China and its position in one of the banks of the Ayeyarwady River, the fourth longest river in the country and one of its major river tracks. It is considered the heart of Myanmar and in fact it is its most significant religious center since more than half of the country’s monks live around in the Sagaing Hills and the ancient imperial cities of Ava, Amarapura and Mingun.In fact I would say that the surroundings of the city in these four coastal Ayeyarwady points are even more interesting than the city itself as in a radius of a few kilometers there are the imperial cities between which alternated the nation’s >capital. The visit to Mingun 11 kilometers north of Mandalay is only possible by boat in a nice ride of an hour.

When viewing images from Spain, always with so much greenery and nature I imagined it would be away from the city, and the truth is that it is exactly at the opposite shore. In fact from the bank in which we boarded you could see the gigantic unfinished pagoda.

The shore was made a muddy impassable because the last night had not stopped raining and the river was quite scrambled although I must say that they are so used to live and cope with the monsoon that did not seem to affect them.Many families make their living on the banks or in tiny islands on 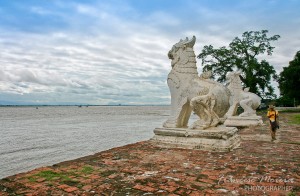 the river in very precarious temporary homes because they are the most affordable land. Fish in the river, do laundry and groom themselves there. Children share games and plunge into the muddy bank full of detritus and debris carried along by the river stream.The boat ride is very nice, there is a great activity and traffic of old ships that are loaded with bales, passengers or teak wood. Sitting on the deck we enjoyed of a nice breeze and the golden domes of Sagaing Hills, a view that anticipates how spectacular the place is. 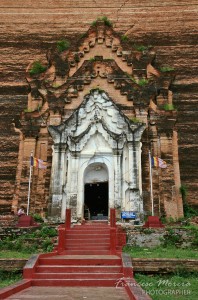 Two huge Chinthe lions received us at the arrival on a small stone staircase that plunges into the river where a small group of young women, wrapped in their longgys focused on personal hygiene.Our arrival frightens them away. Elderly villagers with bullock carts approach to offer transport. Mingun is a quiet fishing village that lives hidden among the lush tropical vegetation and its wonderful temples, including the base of the huge unfinished pagoda, Pahtodawgyi Paya, 50 meters high and full of huge cracks that threaten to destroy it one of these days. What we see actually is just the basis of what would have been the originally projected pagoda 150 meters high if it had been completed.It is therefore known as the unfinished pagoda. The reason why it was not ended lies in a prophecy that said the king Bodawppaya would die soon if he continued in his efforts to finish it. It would not have been need to consult any soothsayer, the pagoda was built using forced labor and prisoners who were very unhappy. Barely fifty years of the 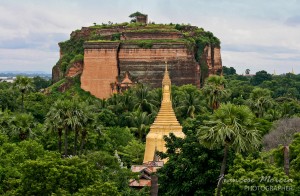 abandonment of the building there was a severe earthquake that cracked it, being able to see the huge cracks that seem scars in the structure. One day these wounds will tumble don it because they have sentenced it and Burma is a country with pretty seismic activity, but so far has held up well three great earthquakes. Sitting among the ruins of the wall that surrounds it cost me nothing to imagine the forced hauling stone blocks whiplash because it is a Pharaonic work. The temple was originally flanked by two giant stone protective lions whose remains we have seen crumbled and covered by vegetation. People rest on their dispersed remains running down tothe river bank.

Another essential temple is the original Hsynbyume Paya or

Myatheindan Pagoda built in 1816 by Prince Bagyidaw mandate in honor of his wife.His seven terraces represent the mountain ranges surrounding the mythical Mount Meru and the views from the upper terrace are great, condensing all the exoticism of this part of the country. The dense jungle vegetation surrounding the temples impresses, and despite the intense heat and humidity is palpable this excursion not only disappointed but I loved it.

In addition we will also see the famous Mingun bell, wich with a weight of 90 tonnes is the largest intact bell hung from the world, I assure that no matter how hard you try to make it sound is almost impossible. The lonely Settawya Paya it is said saves a footprint of Buddha.

It is interesting, if you go early visit the Buddhist infirmary, next to the bell, where they take care of a number of elderly and where all the visitors and contributions are most welcome.