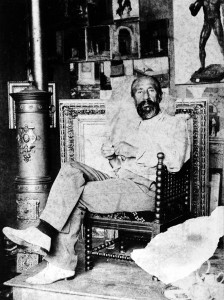 Osman Hamdi Bey (1842-1910) was an influent and unique character that left his mark on ottoman culture, science and art. Very multifaceted person, although his academic training was in the field of law, never lost sight of his interest in art in general and particularly in painting and archeology. Thanks to the pioneering work of Osman Hamdi Bey in the field of cultural institutions Turkey was endowed with a large Archaeological Museum, a rich Archaelogical library and an Academy of Fine Arts.

Osman was born into an influential family, of Greek origins. His father received both influence from the Ottoman culture and the European culture since it was one of the first four students to leave the Empire to study abroad. Held the position of ambassador and prime minister and finally became the Grand Vizier of Abdulamid II. Perhaps for this and following the steps of his father, Osman began his studies at Besiktas but ended up in Paris while he was feeding his passion for painting learning from the very famous Orientalist painters of the time such as Gerome or Gustav Boulanger. At the same time he began taking courses in archeology, his second passion. After his return from Paris in 1869 and having taken part in the universal exhibition with three paintings he was the first commissioner at the Universal Exhibition in Vienna. 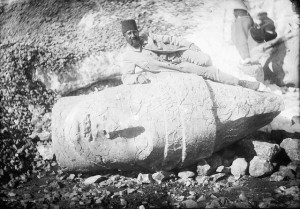 untry’s museums. When he accepted the new position the museum had a career of 25 years and only 650 pieces on display in an arbitrary manner that reminded a small provincial museum, for that between 1882 and 1895 he held very important archaeological excavations that would provide funds to museum. His first excavations were carried out in neighbor Ayvalik and Bergama. Excavations of Mount Nemrut (1883) and Sidon (1887-1888) , and the temple of Hecate in Lagina (1891-1892) led him on the path to success with such magnificent pieces like Satrap sarcophagus , the mourning women sarcophagus or Alexander the Great coffin who came from the royal necropolis of Sidon. The group of sarcophagi discovered in 1887 in Sidon (modern Lebanon) was as often happens in these cases discovered by chance when a local who was digging a well found a huge underground necropolis well protected. From all the sarcophagi, the one which was known for many years as the sarcophagus of Alexander the Great, (although it was finally proved that it was the sarcophagus of King of Sidon Abdalonymus S.IV ac) is still today considered a jewel of modern archeology. It was the first time a Turkish archaeologist voice was heard in the world. Osman Bey promoted major Turkish excavations, some of which are today World Heritage s 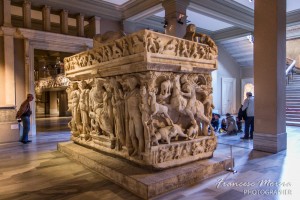 ites such as Mount Nemrut. He was responsible for the construction of the present building of the Istanbul Archaeological Museum, which was open ten years later, and to provide the countless and wonderful museum backgrounds. And he used his position as director of the museum, to develop and to rewrite the laws of antiques. Aware of the lack of regulation on the excavations conducted by foreign countries and the plundering the country was suffering for the benefit of European museums issued a rule in 1883 to protect and control the archaeological and artistic heritage of the country.  A giant step in the establishment of a legal framework for the preservation of antiques. Osman headed the museum until 1909, nearly thirty years, and it can be said he was the pioneer of the museum curator profession. Furthermore, Osman Bey was the founder of the first school of fine arts of the Ottoman Empire in the building within the complex of the archaeological museum known as “oriental antiques” where the Treaty of Kadesh is exposed. Today is the Mimar Sinan University of Fine Arts and is no longer at this facility. As a painter Osman became famous in life and was the first Turkish painter to portray human figures. Pictures and compositions w 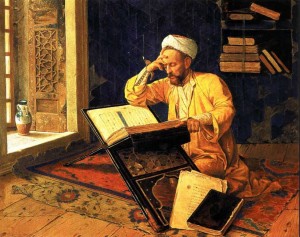 ith great wealth of details: architectural and decorative elements. Among them to mention “The tortoise trainer”, an iconic work by his great significance as he created the painting in a time of great social and political turmoil in the Ottoman Empire. The reforms undertaken by Sultan Abdul Hamid II (reigned August 31, 1876 to April 27, 1909) had proved ineffective and guilty of increasing agitation. The Ottoman Empire, which still included parts of the Balkan Peninsula, North Africa, Anatolia and the Levant, and great part of the Arabian Peninsula at the threshold of 20 century, was under serious threat because of the increasing power of nationalist movements within its territory, but also for the incursions of foreign powers that would eventually divide the empire among them in the aftermath of the First World War. The painting achieved greater importance in the coming decades, as presaged the Young Turks Revolution of 1908 that ended with the autocratic rule directly by the Sultan and set the 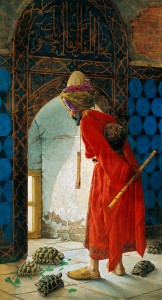 stage for the entry of the Ottoman Empire in World War I on the side of the Central Powers and its later partition.

The painting was sold in 2004 for 3.5 million dollars. Undoubtedly there are unrepeatable characters over time that leave an indelible mark on the history of his country, and Osman Bey was certainly one of them. Intellectual, statesman, Osman Hamdi Bey, was one of these characters. He died in 1910 at his residence at the seashore of Kuruçeşme (Istanbul) and was buried in the garden of his house in Eskihisar (Kocaeli), in accordance with his will. His house in Eskihisar whose plans he drew was transformed into a museum that was opened to visitors in 1987.

Just a brief review to tell you that the Archeological Museum of Istanbul is the first museum of Turkey and one of the most important archaeological museums in the world. It houses more than one 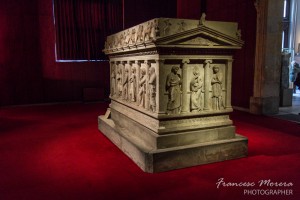 million artifacts taken from various empires and lands belonging to different cultures and civilizations spread over twenty rooms in the old building and four other plants built in the nineties. The museum houses three museums: the Archaeological Museum itself, the Museum of Oriental Antiquities and the Museum of Turk Tiles. Its origin is in the small collection of antiquities that was installed in 1846 in the Topkapi Palace.