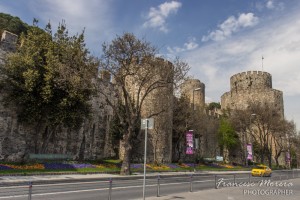 Istanbul never cease to amaze me. In a city of nearly fifteen million inhabitants it’ll almost always be surrounded by the crowd, the noise, the activity, however, and often as I could see, you can feel like you’re alone in the world. In the popular Tahtakale market the feeling is more or less being a canned sardine, in fact if you are unsure where to go it is best to step aside or get into a store or you might ben overwhelmed by human tide.

Therefore, after a few days of excitement and markets we decided to do something completely different going up the Bosphorus to Rumeli Hisari Fortress, known as Europe Fortress.But rather than going by ferry we decided on bus and the result was a tour around the most modern and vibrant area of ​​the city, the neighborhoods of Sisli and Levent. Glass skyscrapers and luxury hotels follow one after another and the headquarters of various international banks are door to door one after another. As the eye can reach. Cafes and design restaurants, shops, luxury … it is not something that particularly interests me but I mention it because it is an area to which anyone not specifically come to do business will come as it is very far from the city center.There are no sights or attractions here 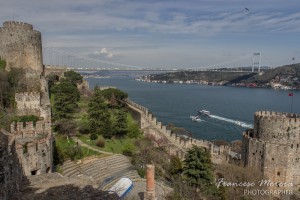 for the visitor. The end of the line left us exactly about the fortress of Europe, with stunning views of the gigantic second Bosphorus Bridge suspended over the sea with incessant traffic of thousands of vehicles crossing from Asia to Europe. This fort was built by the Ottomans in 1453, specifically by Mehmet II, (who eventually would take the city), to facilitate the conquest of the then Constantinople, held by the Byzantines. And as this was the region of the province of Thrace known as Rumelia therefore stayed with this name.On the opposite bank there is another similar but much smaller building, Anadolu Hisarı, the Asia fortress, serving the same function from the Asian shore, contributing to the siege of the city to make it more vulnerable. Within it there are not many things to see, is very well preserved and to have been built in only four months and saving such a huge gap on the land is has very considerable dimensions. Here one can sit on a bench facing the strait and feel like you are alone in the world and the views are there just for your enjoyment. 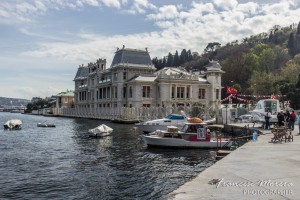 But the interest of visiting the fort was mainly the walk we wanted to do from it toward the Golden Horn.We were interested in visiting two neighboring villages that looked interesting: Bebek and Arnavutköy. A walk of about five kilometres which only show the great diversity of this city. At one mile from Rumeli Hisarı is Bebek, the most chic and trendy village of European coast, where all people come to enjoy the relaxed while cosmopolitan atmosphere of this luxurious villa.The istanbulinners love Bebek, to see and be seen sitting on a terrace overlooking the sea and shopping in its design boutiques or gourmet shops. The opulence and ostentation 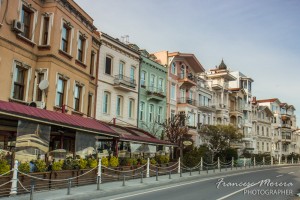 are very visible. However, I have to say I liked neighboring Arnavutköy much more.”The Albanian village” was a tiny village thirty years ago that was mainly populated by immigrants from Albania but today has been swallowed and annexed as other surrounding villages by the vast city. The entire stretch of coastline on which we walk to get there was full of people fishing, men and women, and of small boats moored.The Arnavutköy seafront is beautiful retaining its old wooden houses and a sort of canal surrounding ahead. The

ground floor of these houses are usually fish restaurants.The interior of the village is a typical fishermen village with many nice taverns where you can also eat the freshest fish to more popular prices. The architecture is largely traditional and easy that one would remember the Mediterranean walking by its narrow streets. The village extends to a fairly high hill in the interior that is the nucleus of the population. Here we met a neighbor who runs a local restaurant since 1952, Mr. Hussein Çelebi. When you enter the restaurant it seems to eat sitting at you own home.Or in a friend´s home, as treatment is the most familiar and the food is 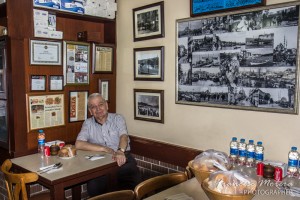 homemade and delicious.In fact, while this man with an easy smile has 87 years (and many would sign to be like him in that physical form) continues to soldier on and you can clearly see that even though his son and granddaughter are working there, he is still the spirit of the place.Its old framed photos, surveys and reviews in newspapers so prove it. Genius and figure, no doubt.

In this walk through Bebek and Arnavutköy we amply fulfilled with our goal of changing the pace and recharge batteries and if I had to choose between one of them I have clear which one would e as both are very close in distance, but could not be farther away in spirit.