The venerated Mahamuni image,  located in a temple  in Mandalay, is also known as “Rakhine Buddha“, as it is in this state of western Burma known before as the kingdom of Arakan where they brought the image from (now sadly in the news for ethnic conflicts between Muslims and Buddhists). It is the most venerated image of the country by its historic and religious significance and is a must-see for any “pilgrim” passing through Mandalay.

It is worth mentioning its history, dating back two thousand years ago and linking the Mahamuni with the very origins of Burmese Buddhism. For the inhabitants of Burma, who have transmitted from generation to generation this belief it is the only real copy that exists of the Buddha because was made in life of it and taking it as a model. So for centuries was the subject of greed for many governors, both Burmese themselves and foreigners.

According to the Arakanese own chronicles in the mid-first millennium BC in the west of the country emerged  a city-state known as Dhanyawadi. According to local tradition the Buddha had a vision in which Arakan “became a land illuminated by Buddhism” and traveled to this region flying from India accompanied by h 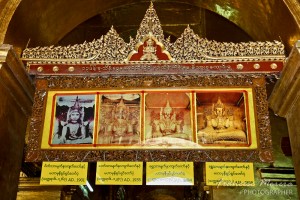 is 500 disciples. The Dhanyawadi monarch invited the Buddha to his palace to receive the Teachings of the Buddha himself. Buddha accepted and for seven days dictated his doctrine. When he was planning his return to India, the king begged the Buddha to make a “replica” of him in order that the faithful may venerate him in his absence. Buddha accepted and so was born the image of Sakyamuni, considered the only real copy of the image of Buddha in the world. The statue, made of bronze, would be called Mahamuni (“Great Sage”) in his honor. The Buddha himself enshrined the statue and transmitted his own aura to it, giving “life”. The king placed the statue on a throne of precious stones and ordered the construction of monasteries around.

Therefore, and according to popular belief, the statue was consecra 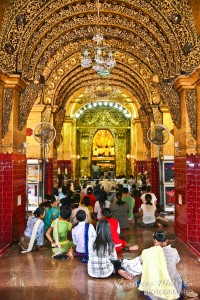 ted by Gautama Buddha himself (the historical Buddha) in order to create a “living twin” that in his absence would advise to kings and give sermons to the community. An ancient arakanese chronicle attributed to the statue special and superhuman powers. The Mahamuni Shrine in Dhanyawadi, with its legendary statue of Buddha, remained the main worship center in Arakan until the eighteenth century, but also became an object of desire by the successive Buddhists rulers.

This led (at the end of eighteenth century) to the end of the stay of the Mahamuni statue in Dhanyawadi after more than a millennium and a half there (according to tradition).

In 1784 the King of Burma, Bodawpaya, heir of the empire founded by his father (the Third Burmese Empire), turned his attention to the neighboring state of Arakan, independent but always coveted by the Burmese. Bodawpaya carried out the conquest being this a heavy blow and a humiliation for its inhabitants, and the statue was taken from Arakan to never return to his place of origin. Obtaining the statue of Buddha was the greatest victory for Bodawpaya because he achieved what his ancestors had wished for so long. The statue, with his supernatural powers, was now in his possession. Being under the control of Bodawpaya the Shwedagon Pagoda in Yangon, the Golden Rock, Kyaiktiyo, and now the Mahamuni, known as the “holy triumvirate of Burma” he had a religious prestige but also a virtually insurmountable political and social power since Buddhism played an important role in the legitimacy of the Burmese monarchy. In fact, among the arguments for  the conquest of Arakan included the accusation that Buddhism in that region was in decline and had to be protected.

But this is the history, the sanctuary that houses the  Mahamuni,  a great pagoda in southern Mandalay, is no 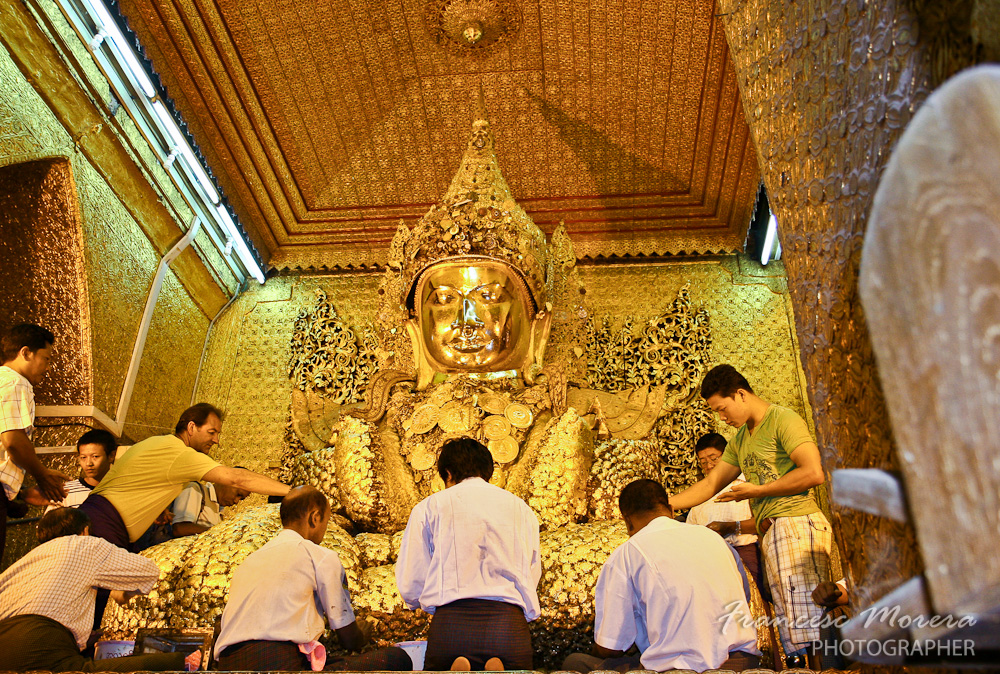 t the original but a reconstruction (not identical) of the building from 1785, which was destroyed by fire. Today the shrine is surrounded by numerous monasteries, artisans, lodges and shops of religious material. When we were entering came to my head the expulsion of the Pharisees of the temple for Jesus, because there really is a big business in the lobby, which does not seem very in agreement with the sacredness of the place.

The statue is located in a stay at the end of the main entrance, and is visible from the front and from both sides. Women are not allowed to access the stay and, like me, we settle for seeing through a door from which you can see part of the image. Statue is resting on a platform about two feet high, and men access it to make their offerings of gold leaf. The Mahamuni statue is made of bronze (though no one would find out beneath a layer of 5 cm thick gold. Gold has made it “fat” and deforms the image especia 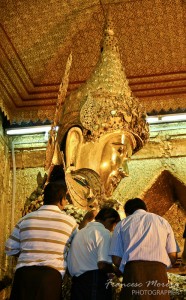 lly at base). It measures nearly four feet high. Its total weight is 6.5 tons, and shows the Buddha at the moment of enlightenment, with his right hand touching the ground as evidence of his past deeds and the other hand resting on his knee with the palm up. The ornaments that crown his head and chest are embedded with precious stones (diamonds, sapphires, emeralds, etc…) donated by Buddhist devotees over the centuries. The image certainly imposes, and it is curious and strange because it is still an inanimate object.

The most important moment of the day is around 04:00 am with the first rays of sun. Then it is performed the ritual of washing the face of the statue. The abbot is the only one who can touch the face of Mahamuni, washing even his teeth. When the process terminates all who have attended to the ritual can make their offerings to the image. His possession and sponsorship by kings in the past and for the military junta currently not only have a  religious but also political order and  is no other than perpetuate control over a society, the Burmese, which religious fervor  is very strong.