In Mon State, about two hundred kilometers away from Yangon we will find the second of the most sacred Buddhist shrine in Burma. Reaching the top of Mount Kyaiktiyo, where we find the peculiar 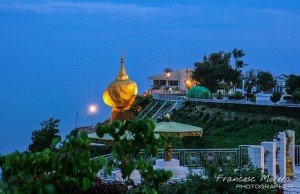 Golden Rock, is to enter into the rural life of the country, through small villages dotted along the main artery of the state, a one-way road, shared by all types of vehicles and road traffic, both animal and human traction. You will find farmers working in the rice fields, and small bamboo houses built on stilts and palm leaf roofed scattered over the landscape.

This entire region is formed by a long isthmus between the Andaman Sea and Thailand, and in general is quite unknown to outsiders. Access to the platform where the Golden Rock lies, is considered part of the pilgrimage, and from Kin Pun base camp, where the trek begins must walk seven miles that save a slope of more than a thousand meters. The first part of the journey has to be done uploaded on top of a pickup of the government, which rises through a narrow, winding paved road, and the rest of the way, an hour or so of walking, there is no other way to do it than by your own means. Access is not easy, as all worthwhile things in this world, but I assure you that the effort it’s worth.

The presence of the Golden Rock is 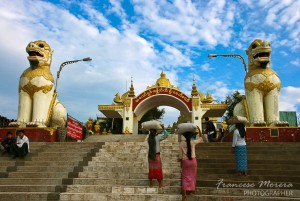 explained of course with a legend that says that the Buddha, in one of his visits gave a lock of his hair to a hermit named Taik Tha, who was seeking a rock with the shape of his head to consecrate in it the relic. Aided by a king who had supernatural powers located the rock at the bottom of the sea and saw in Kyaiktiyo the  perfect place where locate the seven meter rock , on top of which is the small stupa containing a 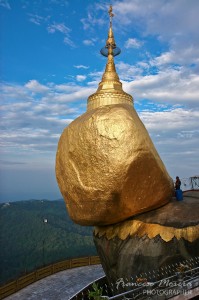 relic  inside. Also, is believed that is the power of the relic which prevents the rock rushing down the hill. The ship that moved the rock turned into another rock, we can also see there, known as Kyaukthanban (literally “stone boat stupa”). The pilgrimage season coincides with the end of the monsoon (November to March) then people from all over the country, and Buddhists from other countries nearby, climb to the sanctuary. The atmosphere is full of devotion and spirituality. Monk children pass to our side, pilgrims make offerings, burns incense and raise its fragrant volutes on those present that pray towards the rock, and small bells are shaken by the wind that brings us sounds of chanting from the monasteries around. Devotees pray all night, some gathered in small shrines annexes to the rock illuminated by candles. This is a completely open and hilly landscape full of lush virgin vegetation, and one fills the lungs and thou 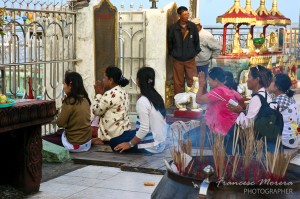 ght with this pure air. The atmosphere is great, and is easy to get caught for it and for the devotion that is breathed despite not being a Buddhist, because it’s something that floats in the air. Watch the sunset and sunrise on the rock is an unforgettable experience because it is certainly one of those places so curious that as with the Shwedagon pagoda, are hard to forget.