Burma is a country of deep Buddhist convictions, since Buddhism arrived to the country almost a thousand years ago. King Anawratha was persuaded by Arahan monk to convert to Buddhism that we know today, Theravada branch, which is practiced in Thailand, Sri Lanka, Laos and Cambodia. So, in 1057, Anawratha sent an army to subdue the Mon ethnic group, whose capital was Thaton, which conserved the Tripitaka Buddhist canon. From this moment, the Mon culture became part of the culture Burmese or Bamar and began the race to build for centuries the most beautiful temples, monuments and pagodas that we see all across the country.

Among them all, there are three places considered especially sacred for pilgrimage, these are: The Shwedagon Pagoda in Yangon, The Golden Rock in Kyaiktyio, Bago and Buddha Mahamumi in Mandalay.

I will dedicate three entries to describe each one. 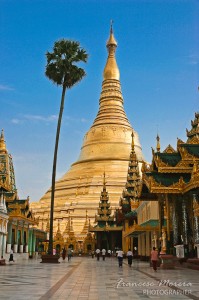 re now moot, but it is attributed an age of 2500 years, the fact is that there are Buddhist monks writings indicating that it was built before the Buddha’s death, which occurred in 480 BC

So we can say that it has witnessed all the events of the country along the centuries, has survived abandonment, looting, fires, and the numerous earthquakes that even came to demolish the top. Therefore Shwedagon is an icon of the country… It is an awesome pagoda, a hundred feet high, which stands on the ancient hill of Dagon, and dominates the city.

In Bago there is another pagoda even higher, but Shwedagon is so revered by the relics that houses inside, according to legend, eight hairs of the Buddha and a piece of cloth. The inside of the pagoda is made of brick, and is not accessible, but has been covered by tons of golden plates, a tradition that began in the fifteenth century by 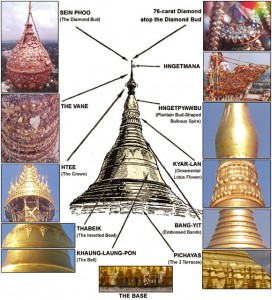 a queen who donated her weight in gold to preserve it. The top of the stupa, is crowned by a Hti covered with 5448 diamonds and 2,317 rubies. The huge complex is not only home to Shwedagon, but around dozens of temples, shrines, 64 minor stupas and places to make offerings or for pray. The atmosphere of meditation and tranquility it is breathed here is great. Yangon has about four million inhabitants, but in here, nothing disturbs the pilgrims. People come to pray and spend time here, prostrating, resting in a temple, even taking a nap, entire families visit and spend the day. Religiosity floats in the atmosphere, and envelops you, touches your heart … I’m sure people feel very comforted by coming here to pray, or simply strolling and resting between his temples because it is a very nice place. Nowadays there is no doubt that it is a must for tourists passing through the town, but this does not interfere with t 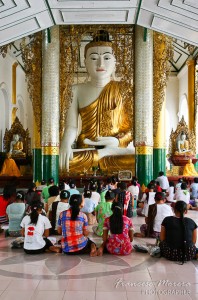 he devotees nor detract an iota of charm. We all get overwhelmed when accessing because for more pictures you have seen and more information you have read , not really expect to find such a temple here. The dimensions of the pagoda are stunning, and everything is perfectly preserved and shiny.

Undoubtedly a place that is hard to forget. For Rudyard Kipling*, that, to me, genius that has portrayed so well all these latitudes with those books so entertaining and colorful, Shwedagon was  “a golden mystery mystery upheaved itself on the horizon, a beautiful winking wonder that blazed in the sun, of a shape that was neither Muslim dome nor Hindu temple-spire… a beautiful wonder  “ 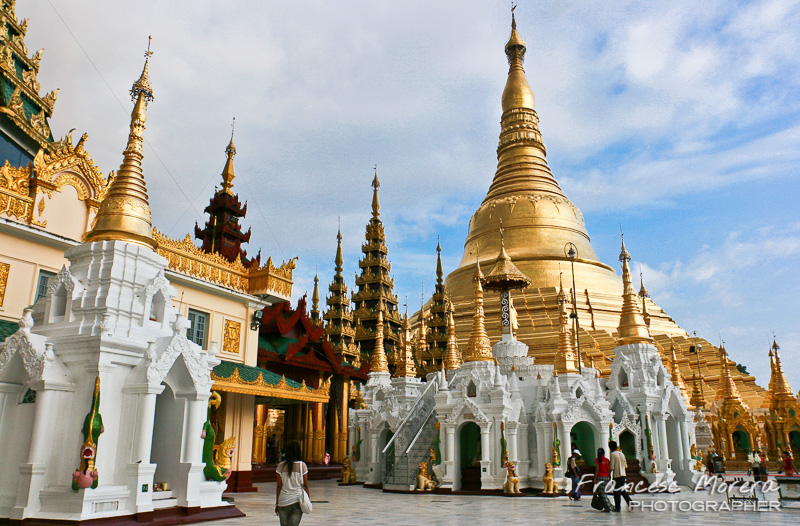