Sadhus or holy men are inherent to the Hindu religion.

The fourth phase in a Hindu’s life, after studying, being a father and a pilgrim, is asceticism. The word sadhu, or holy man refers to mystics, ascetics, yogis, and mendicant monks living on the margins of society. They cut all family ties, do not have possessions and reduce their needs to the minimum to focus on achieving a higher reality. They depend on the charity of people to survive because they cannot work. And the donations made to them are considered as “offerings to the gods” that promote the accumulation of good karma. 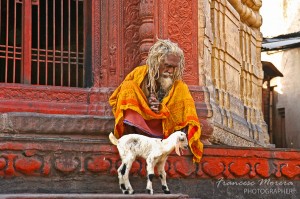 The sadhus are respected and feared as “holy men or messengers of God” and they are attributed supernatural powers, including the ability to throw curses. Only 10% of them are women, called sadhvis, which usually take this route after having widowed, it is almost the only respectable way of escaping the “living death” that are exiled by society.

The basic pillar of Hinduism is the belief in reincarnation, a cycle of death and rebirth that is repeated endlessly, also called samsara. The Hindu aspiration is to get their reincarnations as favorable as possible. This requires to accumulate good karma. The karma, good or bad is related to the good or bad actions that one performs in life, is a causal reaction, cause = result. The highest aspiration of every individual is the release of this cycle that makes you born again and again to suffer and reach Nirvana or enlightenment. Spiritual enlightenment has always supposed the higher vital goal, and is a state of existence that is possible for everyone. The holy men expect enlightened in this life, and to break the cycle of rebirths. 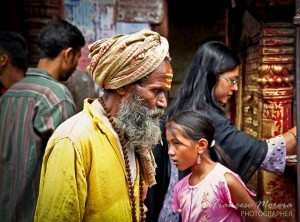 There are four to five million sadhus only in India, and are often found around the temples, walking the dusty roads, in caves and on the riverbanks. In the Kumbh Mela festival, which takes place every three years, can meet hundreds of thousands of them from all sects.

Also Nepal is another country where there are thousands of them, as it is the only country where the official religion is Hinduism. In the surroundings of Pashupatinath, Kathmandu, the most important temple dedicated to Shiva, live hundreds of them. We can observe how some will inflict all sorts of tortures like sleeping on a bed of nails, walking on coals, take years standing … such is the degree of control of their mind. The physical tortures are a mean to achieve supernatural powers.

Although the Hindu pantheon has more than 330 million gods, the main ones are: Brahma (the creator), Vishnu (the preserver) and Shiva (the destroyer). There are two major ascetic sects: the Shivaite or Saivas and Vishnuites or Vaishnavas.

The Shivaite or followers of Shiva are recognizable because they draw the front with three horizontal lines representing the three impurities that Shiva wanted to destroy with the ascetic search: selfishness, desire, action with desire and maya.

The Vishnuites or followers of Vishnu and its reincarnations, (especially Rama and Krishna) and are recognized by the vertical lines painted on his forehead.

Both groups do not leave anyone indifferent, as their appearance is often more than bizarre trying to emulate Gods as they are described in the myths and legends. Certainly you will not find two dressed or just painted alike. In the case of Shivaites , many of them wander naked, they are the Nagas, thus symbolizing his renunciation of the world of mortals. They often carry the body covered with ash that traditionally comes from the cremations, which symbolize death and rebirth…

Others choose not to cut his hair (Jatta) as a sign of material renunciation, and wear two meters dreadlocks tucked below the turban. The jattas represent the power accumulated by the sadhu.

Another Shivaite sect are the Aghoris, which are surrounded by death and eat human flesh; emulating the most extreme characteristics of Shiva as c 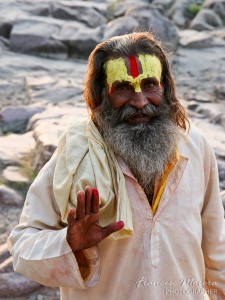 onqueror of death: live around the areas of cremation and bathe in the ashes of funeral pyres; adorn with skulls and bones and take drugs, in a kind of dementia transgression of all Hindus and ascetic taboos convinced that it accelerates the enlightenment. Aghoris are attributed the horrific rituals in which is practiced the necrocanibalism. They “communion” with putrid flesh of corpses, they eat excrement and drink urine and copulate with prostitutes. The Aghoris represent an ancient tradition and there have been times when the sect was very large.

Also among the Shivaites to mention two more sects: the Udasin (Sikh origin, they worship the holy book of the Sikhs) and Yogis (devotees of Shiva, though in his manifestation as Bhairava, they worship Hanuman and Dattatreya).

In the case of Vishnuites, the most important sect are the Ramanandis but there are two more, Tyagis and Sakhis.

TheTyagis, like the Shivaite nagas are naked. They live out in the open and do not use any clothes except a loincloth, many remain in silent, and many prolonge fasting and practice the hatha-yoga.