While Varanasi is the ultimate pilgrimage place for Hindus, only 10 kms from the city we find another place of great importance to Buddhist philosophy, I am referring to Sarnath, holy city for Buddhism. There are four holy sites related to the life of Buddha: Lumbini in Nepal, where he was born, Bodh Gay, in India, where he became enlightened, Sarnath, India, where he gave his first sermon, and Kushinagar, India, where he died.

Sarnath comes from the word Sarangata, “Lord of the Deer”, since according to legend, Buddha in a previous incarnation was a deer. What is not a legend is that in times of Buddha the park was a haven of ascetics. It is really curious, coming from Varanasi, to enter in this enclosure. We’ve gone from the crowds and exaltation to a totally different environment, a haven of peace, where we see many Buddhist monks of different nationalities chatting and walking around. 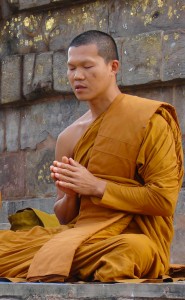 We are in the historical place where Buddha preached his first sermon to his five disciples, in the year 532 BC, giving birth to the Dharma (the law or the governing precepts Buddhism) and the Sangha (Buddhist community). Dharma Wheel is present in India’s own flag, along with the Ashoka column lion. We can see it at the Archaeological Museum which is in the same enclosure. Ashoka was one of the sponsors of Buddhism and its policy was characterized by the ideals of non-violence, religious tolerance and respect for parents, teachers and elders. He sent out Buddhist missionaries to Kashmir, Sri Lanka and Persia and built, according to tradition, 84.000 Buddhist stupas across India.

Sarnath reached its maximum splendor in the fourth century, V a 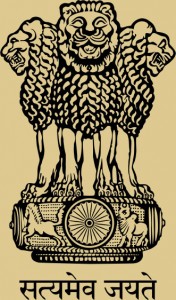 nd VI, Gupta period. According to contemporary chronicles, two centuries after the Buddha’s death, Sarnath had a sangha of 12000 monks who were sponsored by wealthy merchants and nobles of the city of Varanasi. The city was devastated by the Muslims in the twelfth century, like Varanasi (1194).

Until 1834 we did not hear anything from Sarnath, was when Sir Alexander Cunningham began an archaeological expedition in the area and he rediscovered it. One of the buildings that attract the most attention, for its size, but also by its simplicity is the Dhamekh stupa. I have seen many of them in different countries, and really none had this shape.

It is a cylindrical tower 35 meters high and 15 meters in diameter built in the Gupta period. It is built on the 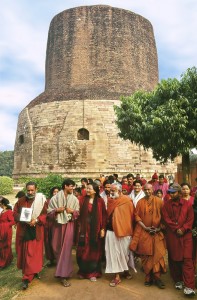 exact place where Buddha gave his sermon. The base is decorated with geometric reliefs and there are some niches that may beware Buddha statues. It was enlarged in six occasions although the top is still not finished. This stupa dates from 500 AD to replace another much older built by Emperor Ashoka in 249 BC.

Another building we visited was the Kuti Vihara Temple Mulagandha, with walls decorated with frescoes depicting the life of Buddha, a recurring theme in the iconography of Buddhism. And finally, and I think the most interesting, the Archaeological Museum, which contains splendid statues of Kushana and Gupta periods. Among the most representative is the capitel that crowned the Ashoka Pillar with the four lions, oriented to the four cardinal points, an 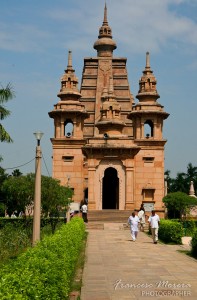 d the wheel of life, emblem of India. And the famous statue of the Buddha from Sarnath, which can be considered the prototype for all Asia in which the attributes and characteristics of the founder of Buddhism are definitely established.

Although Buddhism drinks from Hinduism, Buddhism in India today has a very few followers because not even 1% of the population practices it. The reasons for low coverage are analyzed even today, and appear to be related to this philosophy was contrary and tried to abolish the caste system on the one hand, and the fact of being a pacifist religion, unfit for support a such  warrior nation like India.