His huge golden dome was visible from the distance, and once there we discovered that it was not only a stupa over, but a large complex which access through a covered passage that was quite lively, with craft stalls and religious articles.

Shwezigon is another of the important temples in Bagan, very different from those already mentioned of Manuha or Ananda Paya. It is located between the town of Wetkyi-in and Nyaung U and is the main point of interest in this area, about 5 km from the oldest Bagan.

The relevance of Shwezigon is due to it was built with the purpose of being the most important reliquary shrine around Bagan, which would contain among others the frontal and neck bones of the Buddha, a replica of the Buddha‘s Tooth Relic in Kandy, (Sri Lanka), and an image of the Emerald 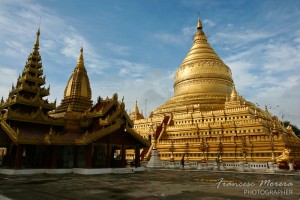 Buddha of China. The legend tells that the location of Shwezigon was chosen by a white elephant.  A place for prayer and reflection for the new Theravada faith King Anawratha, (one of the kings who built more temples) had established in Bagan. In fact, this pagoda was started by King Anawratha, but was completed during the reign of King Kyanzittha, in 1076, another of the great builders kings of Bagan, during whose kingdom the city was known by the nickname of “city of four thousand pagodas”

The novel and gracious golden bell of Shwezigon was the model for almost all the ones that were built later. The golden bell is decorated with different designs, surrounded by moldings, and topped by a Hti or jeweled needle symbolizing sovereignty. 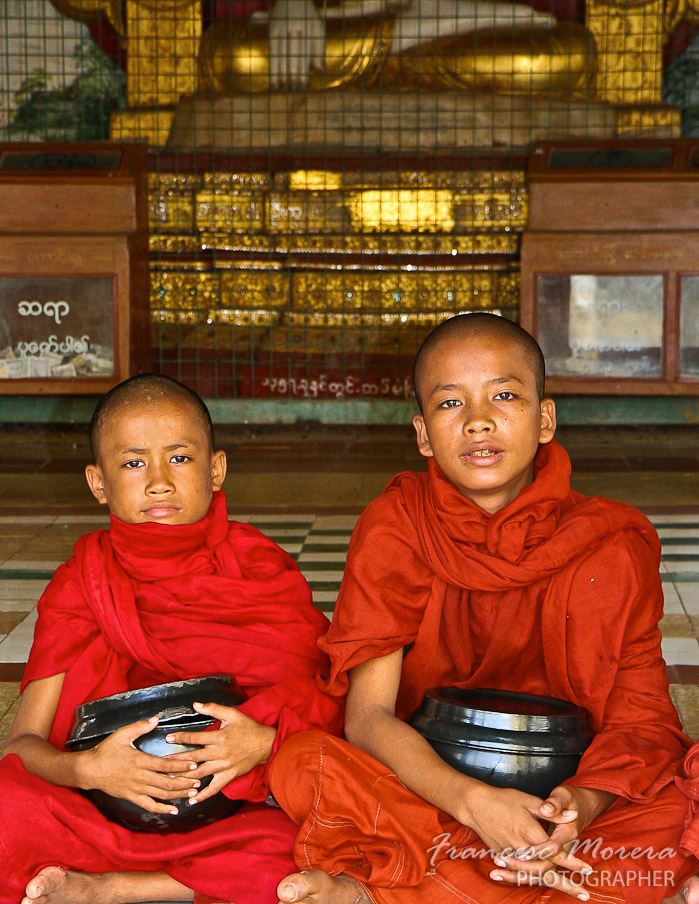 This rests on three ascending terraces, and in the base of the pagoda are enameled plaques depicting scenes from the Jataka or the 550 previous lives of the Buddha. In the four cardinal points, front steps of the terrace, there are four chapels, each of which houses an old Buddha bronze statue four meter high. These statues, Gupta style are the largest of its kind preserved in Bagan and represent the four Buddhas who attained enlightenment in life (being the last of the four Siddartha Gautama).

In addition to being one of the oldest stupas of Bagan, Shwezigon is famous as the place where the 37 pre-Buddhist nats were officially recognized and supported by the Bamar monarchy, and, indeed, in the enclosure you will find a room with statues of the 37 nats.

As all the monuments of Bagan, this great pagoda has been damaged by earthquakes and the passing of time and has been repaired several times, especially by King Bayinnaung in the sixteenth century. The devastating earthquake of 1975 caused extensive damages and was necessary to repair the top of the dome and the Hti. But the bottom of the stupa and the terraces are still mostly original of the XI century. 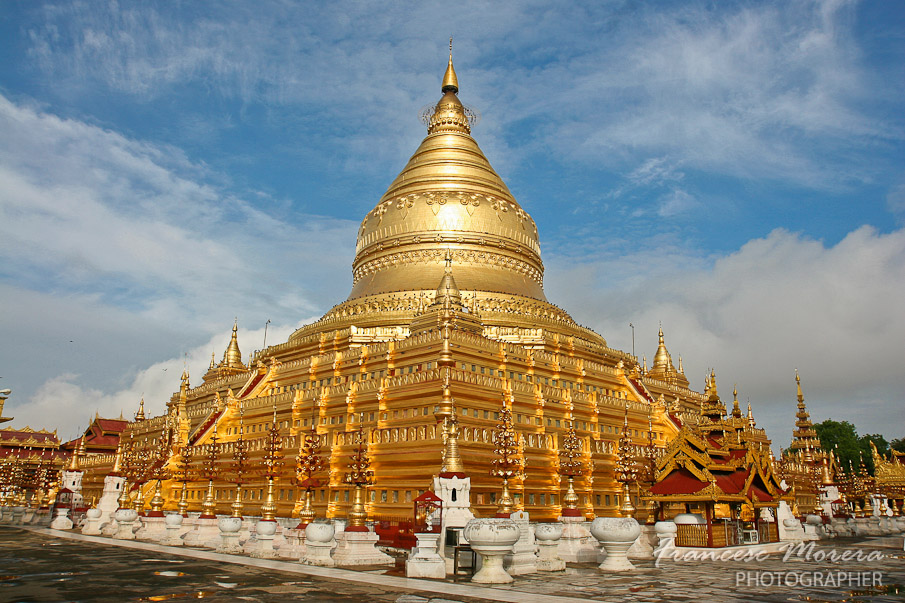 Due to the great religious importance of the pagoda for the Burmese Buddhism Shwezigon Festival which is held in November-December attracts pilgrims from all over Myanmar.

You can see a video with images of Bagan