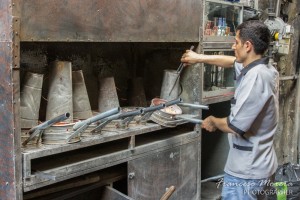 Walking along the Divanyolu Cadessi street in the old town of Istanbul, towards the Great Bazaar we will observe that there are several enclosures attached to mosques or ancient buildings that are Ottoman cemeteries with its curious tombstones engraved and crowned by different types of turbans and hats all surrounded by the vegetation. It can look like slightly macabre saying it like that but the certain thing is that in Istanbul, inside the city, it is easy to meet dozens of them, life continues around and do not seem to disturb anybody since they really have more of romantic than of phantasmagoric.

In one of these enclosures, whose old tombs can be observed from the street you will find the former madrasa and Corlulu Ali’s mosque. But it is also one of the most captivating tea shops in Istambul. From the principal street one can doubt if it is or not the place, since the site really confuses and the response is yes, come in, you will all be welcome.

Once inside, we will meet a central court surrounded by a covered zone under which there are several coffee and tea shops. In these spaces not many years ago I have known also carpet shops. But now only one tends stays, the whole space is occupied by the tea and narguile shops that have basically a local and faithful clientele. Of between all of them probably the most famous one is “Erenler”. The court belongs to Corlulu Ali’s former mosque, built around 1709.  Corlulu Ali Pasa was the political son of the Sultan Mustafa II and he was one of the great viziers of Ahmet III. Nowadays, the 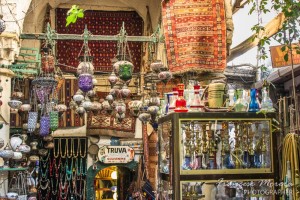 mosque of a single minaret guards in a tomb of stone hidden in some place of the enclosure Ali Pasa’s head, executed in Lesvos, and the former cells of the coranic school  where the students used to sleep today are used principally as coffees. Shopkeepers of the nearby Great bazaar, neighbors and students of the nearby university are its clientele. The ambience is exceptional for the atmosphere and the special environment in which we are. The flagrant smoke of the narguiles rising in scrolls between the pale local light invites to the dream. It is a certainly masculine place though it is opened for anybody, where one comes to relax and to smoke narguile indulgently semi leaned on the cushions and low sofas of the local. Beyond the walls of stone there exists neither the hurry nor the noise of the exterior of the boisterous street YeniÇeriler, only the whisperings of the fellow members. 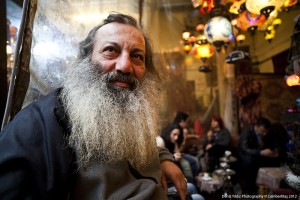 I adore this place to finish the day after crossing the city because one can be absent-minded and let the hours pass by while observing the parishioners. They play some the chess or the dominoes, others chat or do business but everybody speak very low, a non writing code of conduct so marks it. Nobody except the foreigners seem to be out of tune, well, in my last visit and for my displeasure I could verify that they have hung a big plasma t.v from one of the walls under the arches to see the football matches, and it breaks the set, but at least without

I might say that the place still fulfills with the expectations of anyone, it continues being authentic enough and his special atmosphere is preserved but the trend is that of a place that is going to end up by dying of success because it already begins to be known and touristic.