I had already visited Morocco on two other occasions and Tetouan had never appeared in any of these tours.  It is not that is not listed in the travel guides, but too often is described as “city of pass” or as a “city to avoid” for travelers for the insecurity. However, in this time I must say I was quite curious and with high expectations for the visit to the city of Tetouan.

It seemed to be the hub of a largely unknown part of the contemporary history of Spain which for some reason that escapes to me is not taught at school. Possibly for many of you the interest of knowing has aroused through literature like in my own case. Since I first read “The time in between” from María Dueñas my curiosity for knowing more of this stage of the story that seemed had never existed was in crescendo until this visit became almost a necessity. I wanted to contemplate that 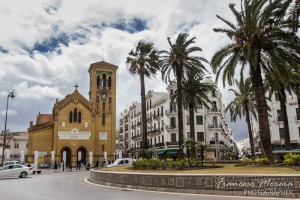 city sheltered by the peaks of the Rif which had been the capital of the province of Yebala during the protectorate times and that had so many points of contact with Spain. That city they describe as “the most Andalusian of the Moroccan cities”.

Tetouan is approximately forty kilometers from Ceuta, surrounded by mountains but close to the Mediterranean Sea. Its history and culture is linked to ours from the moment that Moorish and Sephardi Jews expelled from Granada began to settle in the city in the late fifteenth century. In 1913 it was chosen as the capital of the Spanish protectorate in northern Morocco and in the subsequent decades the city experienced a major urban transformation, acquiring and developing an aspect very similar to other Spanish cities of its time. Many families related to the military stationed in the north of Morocco as well as civil servants and merchants moved there and thousands of them after the independence of Morocco did not return. The city at the end of the Protectorate was an important military garrison with numerous barracks, detachments and even an airbase. In this period the Medina of Tetouan, now recognized by UNESCO as a World Heritage Site was also rehabilitated. But the truth is that after the independence of the country most of the Jewish population and Spanish inhabitants were leaving the city, and its businesses and 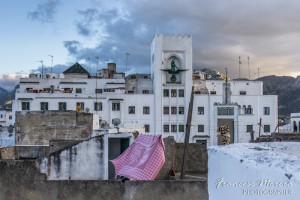 industries were disappearing or transforming itself, beginning a stage of decline of the city.

Spanish District is a central area of the city, between the old Medina and the new districts in which this Spanish presence is more evident. The “Building Regulations for Widening West Tetouan” was published in April 1914 and planned to build 60 blocks of polygonal shape of 40×50 60 x80 m, main streets separated by 12 m wide and 10 m high. Buildings should have a height of 11.5 m, but the officials may exceed this limit. Distric stood on a plateau west to the outskirts of the Medina and was attached to it by the square of Spain. Starting from Square Muhlay Mehdi as a reference where you find the well known Paris Coffee, the Nuestra Señora de la Victoria Church Building or The post Officce building you can tour the area on a nice walk, just a little eye lift.

The streets are clean and cobbled, dotted with dozens of whitewashed buildings with wrought iron balconies from the twenties to the fifties. Mostly are well maintained and are today as they would at that time posh accommodations built for the middle and upper classes. Some people complain that they are very careless, I did not appreciate it as well, in fact I think the charm they have is that they are old, as they were left. To mention some building that surely will take 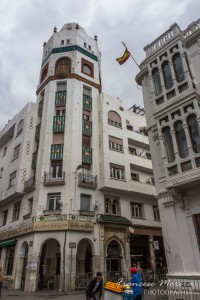 your attention, I would choose the building of the Union and the Phoenix insurance company, in Al-Yalaa Square, built in the forties and conceived as business building. The huge sculpture of the Union and the Phoenix monitors the rooftops of the city. At low arcades there are many small businesses including a 100% popular restaurant called “The Union” that certainly someone will recommend to you.

Another building that caught our attention and that at that time belonged to another insurer is the Equitable Building of the same decade, whose tower in corner and tiles is quite striking. In the same street, you will find the Spanish Theatre, (this actually was built to serve as cinema) and the Cervantes Institute. Asma, in charge of the Blanco Riad told us that this facade acts as the workshop and home of Sira, star of “The time in between” t.v serial in its stage of Tetouan. Down the street we reach the 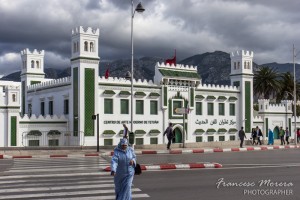 majestic arcaded door of the Municipal Market, of the fifties, the City Hall and the bus station. On the back of the city hall, old tobacco factory and the railway station some scenes of the series were also filmed.

But there are many more unique buildings and others that caught my attention because their environment managed to make me think that this was a scene from another time. In Av Mohamed Khatib, near the Cervantes Institute I found the “Circle of the Union”, a kind of casino like one of those which a few years ago started to disappear in most villages and small towns of our country but a few decades ago were the epicenter of the social and cultural life of the community. Large windows let see elderly gentlemen, (possibly from those who did not return to Spain after the country’s independence) dressed in suit and vest that were reading the newspaper sitting in a wing chair. Others were chatting taking a cigar. It seemed a scene taking from the novel “The Hive” by Camilo José Cela, recreating the same time. The circle was founded in 1920 and at that time there came to be several in the city, recreation and meeting point place for expatriates. It will draw your attention that most of the businesses in the Spanish Widening also retain an aesthetic of the fifties, with banners and posters also in Spanish. There are many outdoor cafes and exquisite cake shops where is very common to hear speaking in Spanish. In fact it is the second language in this part of the country instead of the French and the vast majority of middle-aged Tetouan people speak it. Incidentally, in the distric there are also three 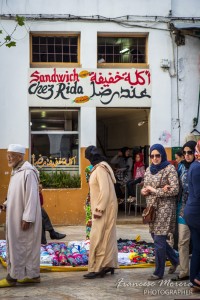 Hassan II Square is a vast esplanade chaired by the Royal Palace. Formerly this was the meeting place and landmark of the city known as the Plaza of the Feddan. But all this disappeared to build the current palace evicting the old headquarters of the High Commissioner and then Spanish Consulate General of Spain. Another area in which you will enjoy strolling is the Luneta, the first Spanish street in Tetouan, attached to the old medina and what it was before the Jewish Quarter. To find it is easy, just walk on one side of the Hassan II square. The area is full of antique clothing stores, tailors and fabrics. Many houses on the street Luneta, like other of the Widening, have the facades coated with tiles from the Cartuja of Seville. Also abundant with modernist designs tiles in doorways and stairs, and even inside the houses. This street had a great commercial importance and was very busy whilst the railroad was operative as it was the shortest route to go down to the station, both from the Medina or from the Widening through the door of Bab Remuz (also known as the Luneta gate). This area appears in numerous scenes of the TV serial as this is where the Candelaria pension are filmed. In the second part of this post I will write about one of the jewels of Tetouan: its Medina. Don´t miss it!